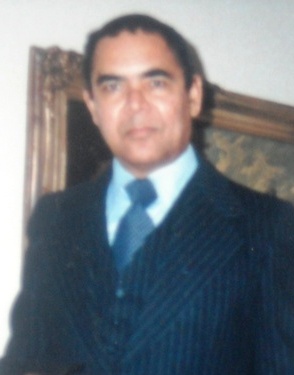 Manhin Look-Yat was born in the island of Trinidad and Tobago in 1925 of a native Trinidadian Mother and an immigrant Scottish merchant Father. He was always intrigued as a child by the myriad of life-forms from the minute microcosms of life forms both plant and animal to the vast macroscosm of the universe all around him. His flights of fancy as a youth found him fully engaged in the pursuit of knowledge of such things he was ever so curious about. With a great enthusiasm on the nature of things from geology, anthropology, physics, science in all its strata, to the most deeply rooted fire within, the study of astronomy, cosmology and the cosmogony of the universe.

Like James Croll before him, the 18th century self-taught scholar and astronomer who was accepted as a scholar of distinction by the scientific world, Manhin Look-Yat, by his mid-twenties and early thirties began a series of journals on the various sciences taking great interest in the theories on planetary motions. Not placing emphasis on traditional college education, much like James Croll, who authored major books such as 'The Philosophy of Theism' and "Climate and Time', Look-Yat also embarked upon documenting his own NEWLY REVEALED theory on True Planetary Motions in 1976 through 1996. He knew he had found the KEY to TRUE PLANETARY MOTIONS. With the advancing effects of Parkinson's disease, he completed his manuscript just before his death in 1996.

He valued all great scientific thinkers, but challenged the noted learned men of past centuries such as Galileo and Kepler in his observation of the deficiencies in their projections of astronomy and planetary motions. With his discovery of True Planetary Motions, he later became engrossed in a particular topic ,which even almost 25 years or more ago, places his theory in an avant-garde category of vital importance in the crucial topic of climatic changes so much a buzz word in today's number one global concerns...

By his late sixties the rigors of the rapidly aggressive effects of Parkinsons disease interrupted his life works yet unpublished at the time of his untimely passing from suicide in the prime of his years and life works in July, 1996. He wrote in the margin of his manuscript:

"I am the only one who has come to this revelation, the only one with my name,and this discovery shall go with me to my grave"...

It was upon reading this that his last daughter and best critique, took on the vow and personal dedication to complete his life's work on this crucial discovery in presenting the body of works to the world. The audio tapes and manuscript remained in her possession for over thirteen years until 2009 when upon discovering the remaining manuscripts and audio tapes on a trip back to her family home she mustered up the courage to begin the transcribing of the volumes of data in presenting the finished works to the world finally in this book release titled by her father:

"His observation of the universe using first time ever discovered projections from his calculations based on his theory of "TRUE PLANETARY MOTIONS AND RHYTHMIC CLIMATIC CHANGES" is not only brilliantly demonstrated in his documented drawings of his projections, but will prove to be unfathomably priceless to mankind in the advent of his revelations and discovery"

"A lifetime labor of love, his valuable works are worthy to be recognized by the Nobel Prize!"

Scientist and Astronomer Manhin Look-Yat, my father, was an extraordinary man with extraordinary vision into the birth of the most astronomically significant discovery of the millennia and of all time. Man has been since time immemorial at the mercy of catastrophic climatic manifestations that have changed the face of the planet and altered countless civilizations through the eons of time. With the discovery of TRUE PLANETARY MOTIONS and RHYTHMIC CLIMATIC CHANGES mankind will no longer be playing the guessing game on his fate as now the confusion on global warming and global cooling will be lifted. Now cyclical climatic changes will be systematically and accurately gauged for a new beginning for humanity.

He spent the better of twenty five to thirty years perfecting his projections of his discovery of true planetary motions from the early 1970's to 1996, the year of his death from suicide from Parkinson's disease. It was his great passion to produce his manuscript typing one finger at a time on a typewriter I gave him as a young woman, also intensely interested in his work. His accurate projections will reveal the orderly procession of planets in our solar system in orbit around a moving Sun on its own cyclical rhythms of orbit on the inner hub of our galaxy, contrary to all previous findings based on a stationary Sun of late and early astronomers.

He was most concerned that his discovery would go with him to the grave, upon his death which is the impetus for my forging forward with the transcription and publication of his manuscript. This is a most urgent and timely release of his findings that will give answers to many or most of the unanswered questions of our cosmos. I have chosen to present this matter to you worthy men of science, as a first step to sharing this important discovery with the science community.