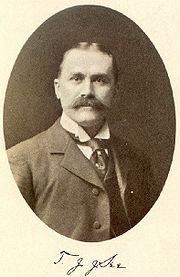 Thomas Jefferson Jackson (T. J. J.) See was born near Montgomery City, Missouri, and received his undergraduate degree from the University of Missouri in 1889 and Ph.D. from the University of Berlin in 1892, both in mathematics. He specialized in the study of binary stars, particularly in determining their orbits, and served at the University of Chicago, Lowell Observatory and the United States Naval Observatory. From 1899 to 1902 his arrogance in defending his interpretation of some gravitational anomalies led to his dismissal and a nervous breakdown. He spent the rest of his career, until 1930, at the naval shipyard at Mare Island, California, where he researched the fundamentals of physics.

See was an aetherist and vehement critic of Einstein's relativity. He wrote many articles ranging from the origin of the solar system, the size of the Milky Way, the cause of sunspots and earthquakes to the aether, which served as the framework for his theory of everything.

Brief Biography And Popular Account Of The Unparalleled Discoveries Of T.J.J. See (1913) by William Larkin Webb