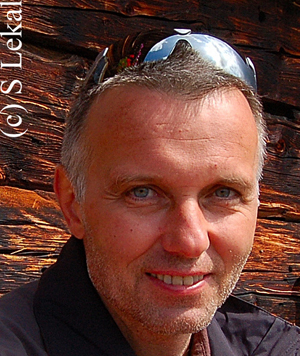 Dr. Hofer's research is focused mainly on high-precision methods to simulate electron transport within a scanning tunneling microscope (STM). Initially, the application of perturbation theory centered on the modification of images due to different tip structures and atomic displacement in the close distance regime between surface and STM tip. He has shown that the method can be applied to practically all experimental situations, where STMs are used to analyze the geometric or electronic structure of metals, semiconductors, and molecules adsorbed on a conducting substrates. Recently, he has developed a scattering approach for the tunneling problem, which overcomes the problems related to perturbation theory, in particular the low-bias limit, imposed by a perturbative treatment.

The aim of his work, to simulate all aspects of scanning tunneling microscopy and spectroscopy, has led to some important extensions of the scattering model, in particular an efficient method to treat electron-phonon coupling, and differential spectroscopy models for high-precision spectroscopy. At present his groups collaborates with more than twenty experimental and a number of theoretical groups. The original method, now freely distributed as a program package called bSKAN, is used by many groups worldwide. His current research projects, relevant for the nanoelectronics network, include:

"Werner Hofer has a foot in both camps. He's an expert on the conventional theory behind the scanning tunnelling microscope, but maybe at heart he's a dissident." - Caroline Thompson