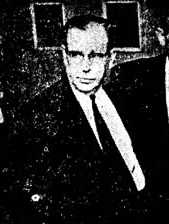 Otis T. Carr first emerged into the 1950s flying saucer scene in Baltimore, Maryland, in 1955 when he founded OTC Enterprises, a company which was supposed to advance and apply technology originally suggested by Nikola Tesla. The claim to be applying some idea of Tesla's was quite common among exploiters of the flying saucer mythology in the 1950s--- for example George Van Tassel's Integratron was supposedly based partially on (unspecified) lore from Tesla, partially on lore from friendly Space Brothers from Venus.

Carr patented a toy flying saucer made of paper, and asserted he was working on a full-size version which could fly to the moon and return in less than a day, and which used two counter-rotating metal cones, plus spinning electromagnets and capacitors, powered by a large spinning battery, to become "activated by the energy of space." Carr's scheme actually resembles slightly earlier proposals by John R. R. Searl and T. T. Brown. The laws of physics require that Carr's device, when put into operation, could do no more than sit there and hum, either loudly or softly depending on the care with which it is assembled. In practice, Carr didn't even usually manage to demonstrate a hum, or a vibration. Carr also claimed to have invented "The Gravity Electric Generator," "The Utron Electric battery," "The Carrotto Gravity Motor," and "The Photon Gun."

Ray Palmer's Fate Magazine gave Carr a great deal of free publicity, not all of it complimentary, throughout the 1950s. Carr and his promoter Norman Evans Colton also frequently appeared during the same period on Long John Nebel's pioneering radio and TV talk show, and during each appearance, Nebel usually managed to prompt Carr into his usual state of nearly-total incoherence. Typical: "Can you describe what you're holding in your hand?" "This is a dimensional object. It was designed with the dimensions of space itself. We say it is truly the geometric form of space, because it is completely round and completely square." Carr also said his great secret could be best expressed mathematically as "minus zero" (or "zero X"). Colton and Carr sold quite a bit of stock in their enterprise, however. Carr also saddled up with obscure contactee Wayne Sulo Aho, and he and Aho toured the various "flying saucer clubs" that then existed in nearly every major city in the US, touting the wonders of Carr's spacecraft propulsion system.

In 1958 Carr stuck a deal with the owner of an amusement park, Frontier City, in Oklahoma City, Oklahoma. Apparently the terms of the deal were that Carr would construct a full-scale (45 ft) mockup of his saucer, OTC X-1, to be converted into a ride for the park. Carr relocated to Oklahoma City, provided the park with a dummy OTC X-1, and claimed to be readying a 6-foot "prototype" of his saucer for a demonstration flight at the fairground. Carr said his demonstration model would rise to about 500 feet. He also said he would follow that triumph on December 7, 1959 by launching a working 45-foot saucer, matching the amusement park mockup, and, with Wayne Sulo Aho and himself as pilots, would fly from the fairground site to the moon and return in a few hours. The 6-foot saucer was supposed to be launched on April 19, 1959, but it never even made it to the fairground, and neither did Carr. Visitors to Carr's factory site during the period did not see any actual models, working or otherwise, of either the 6-foot or 45-foot saucers. Instead they were shown a small and motionless "three dimensional illustration of Carr's ideas" made mainly of wood. Carr had already dropped from sight before the launch date for the 6-foot model, and was not seen for quite some time thereafter.

In January 1961, Carr was convicted of "the crime of selling securities without registering the same" in Oklahoma, and fined $5,000, far less than the sums he had obtained from investors in the area. He was denied an appeal on March 1, 1961. Carr could not pay the fine, and served part of a 14-year jail term. Colton fled the state and soon resurfaced elsewhere, still selling non-working "free energy" technology. Aho was found to be an innocent dupe. After his sentence ended, Carr lived quietly in Pittsburgh until his death in 1982.

Nine 1958 Long John Nebel radio shows featuring Otis T. Carr and/or his work. The quality is poor, but the content is of historical interest. Long John Nebel had a wide audience, covered all aspects of the unusual and paranormal, and was the Art Bell of his day. (To download, PC users right-click and then select Save As; Mac users option-click.)