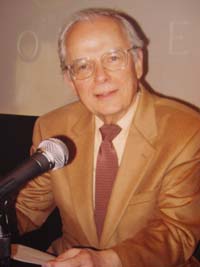 William H. Terbo is the closest living relative of Nikola Tesla and a Founding Director, Chairman of the Executive Board and, since 1998, Executive Secretary of the Tesla Memorial Society, Inc.

The Society, founded in 1979 and incorporated in 1980, is the oldest U.S. based international organization in continuous operation honoring and perpetuating the memory and ideals of the great electrical scientist and inventor, Nikola Tesla. The Society fulfills its mission in a manner of serious scholarship and dedication. The Executive Board is comprised of persons who have made important accomplishments in areas of Tesla technology and history.

The Society cooperates with a very limited number of other organizations that promote a respectful appreciation of the man and his accomplishments in a manner compatible with the mission of the Society. These organizations include the Mid-America Science Museum (an affiliate of the Smithsonian) and the Power Engineering Society of the IEEE (who offer an annual Nikola Tesla Award in recognition of outstanding performance in the field in which Tesla is an icon.)

The Society also sponsors certain projects that support important elements of its mission and that do not compromise its ethical standards. Among the projects receiving Society sponsorship have been The Tesla Collection (a resource of 4,500 pages of features and articles about or by Tesla that appeared in the technical and/or popular media from 1885 to 1920), Tesla, Master Of Lightning (the PBS video biography and companion book) and NIKOLA TESLA: The European Years (the 2004 biography.)

Being the closest living relative of Tesla has afforded Mr. Terbo two distinct advantages in efforts to reestablish Tesla's significance in the creation of the modern technological world. First, Mr. Terbo is called upon in the name of the family to accept honors accorded to Tesla or otherwise honoring Tesla. This provides preferential access to people and organizations not normally accorded to others. Second, the media coverage of these events brings notice of the reputation and research potential of the Society. This generates requests from reporters, writers and video documentarians for information, assistance and/or participation in their efforts. This allows the Society the opportunity to guide the creation of new material and to correct some of the misinformation about Tesla that has taken on the standing of fact due to years of repetition in documents that have exercised less care in scholarship.

Among the more notable events honoring Nikola Tesla at which Mr. Terbo represented the family were: Tesla's induction into The National Inventors Hall Of Fame, the observance of Tesla's 125th Birthday, the issuance of the Tesla Commemorative U.S. Postage Stamp and the reception for the PBS documentary Tesla, Master of Lightning.

The 1975 Inventors Hall Of Fame induction of Nikola Tesla was repeated in 1976 at Independence (Congress) Hall in Philadelphia as a part of the U.S. Bicentennial Celebration. The 125th Tesla Anniversary celebration in 1981 was held at the National Academy of Sciences in Washington and was hosted by the U.S. Congress and the IEEE. The 1983 Commemorative Stamp was presented at the U.S. Commerce Department's Patent and Trademark Office in Washington and was followed by a symposium The Inventor's Environment at the Smithsonian Institution. The reception and preview showing for the PBS TV Network 90-minute Tesla biography was also held at the National Academy of Sciences in Washington. Mr. Terbo was pleased to speak once again at the National Academy.

Mr. Terbo's grandmother, Angelina, was Tesla's eldest sister and his father Nicholas J. Trbojevich (Tesla's nephew and 30 years his junior) was a world-known research engineer, mathematician and inventor. Mr. Trbojevich held about 150 U.S. and foreign patents, including the basic patent for the Hypoid gear, found in the great majority of the world's automobiles since 1930. Mr. Trbojevich was the only other member of the extended family who was technically educated and the only family member to join Tesla in America (in 1914.)

The Tesla family tree is a sparse one. Tesla never married. (As he often said, marriage and discovery are both full time jobs.) Tesla's three sisters had a total of ten children. Those ten had a total of only five children. Of that five only a cousin, Jovan Trboyevic of Chicago, and Mr. Terbo are living today.

Mr. Terbo was born in 1930 in Detroit, where his father's seminal work in gear design was most utilized. With such a history in science and engineering, his higher education was simply a matter of ?what engineering school to attend? rather than ?what profession to follow.? After graduating from Purdue University, Mr. Terbo spent a number of years in the missile and space industry in Los Angeles, co-founding businesses in solid-state electronics and cryogenics. Since 1973, and until his retirement in 1990, Mr. Terbo had been associated with the development of data oriented services for international telecommunications carriers.

Mr. Terbo speaks regularly on the personality, ideals and accomplishments of Nikola Tesla. In the past 30 years he has given more than 150 interviews, spoken to at least 100 symposia, conferences or other events and made on camera (and/or voice-over) appearances in about 20 video documentaries for domestic and international network television. He has a personal archive of approximately 10,000 Tesla-related items

Mr. Terbo actively supports activities that honor the memory of his famous relatives.