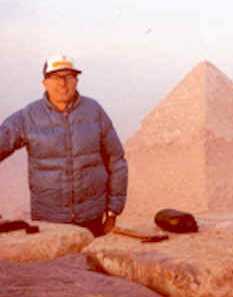 CA - COORDINATOR OF EXPERIMENTAL PROJECTS - Joe is an electronics engineer with over 40 years experience, inventor of the gamma ray transducer, and holds a law degree. He has wintered in Antarctica twice, once at the South Pole during DF75 and once at Palmer Station during DF78. In October of 1978, while Joe was at Palmer Station, he discovered the Gamma Ray Transducer. He has also wintered once at Thule Greenland and has been involved in 8 major projects throughout the world.

Joe Parr is one of the few people who has spent an entire night on two separate occasions (1977 & 1987) on top of the Great Pyramid conducting electrical, magnetic, and radioactive measurements all night long. It is interesting to note that through all this travel and research Joe has Marfan's Syndrome. He has also attributed some healing due to his work and proximity to the Great Pyramid.

He has done some incredible experiments with rotating pyramids, electro-magnetic and radioactive sources.

A pyramid normal has this bubble or energy field around it but it may not be very strong or measurable. Joe has measured this energy field for over 20 years and found out that it varies with the 11 year sunspot cycle. Joe developed an elaborate experimental setup. By rotating a pyramid in an alternating magnetic field, he can increase the energy to this bubble so you can do experiments with it and see what kind of effect it has.

This increase in energy to the energy field causes the bubble to become opaque (that is it starts to block energy fields from passing through it - shielding). Joe discovered that it can partially block all known energy fields (gravity, electromagnetic, and radioactivity). It also appears that objects in the bubble as measured with sensitive equipment during this time lose weight. Joe actually placed radioactive sources, radio frequency sources, and magnetic sources inside the pyramid and measured the shielding of these sources by the energy field or orb.

Joe has done over 55 experiments which seems to indicate that this pyramid can pass through physical objects. Thus, Joe thinks it enters hyperspace at this time. Thus, it does not occupy the same physical space but is now in another spatial dimension, which we call HYPERSPACE.