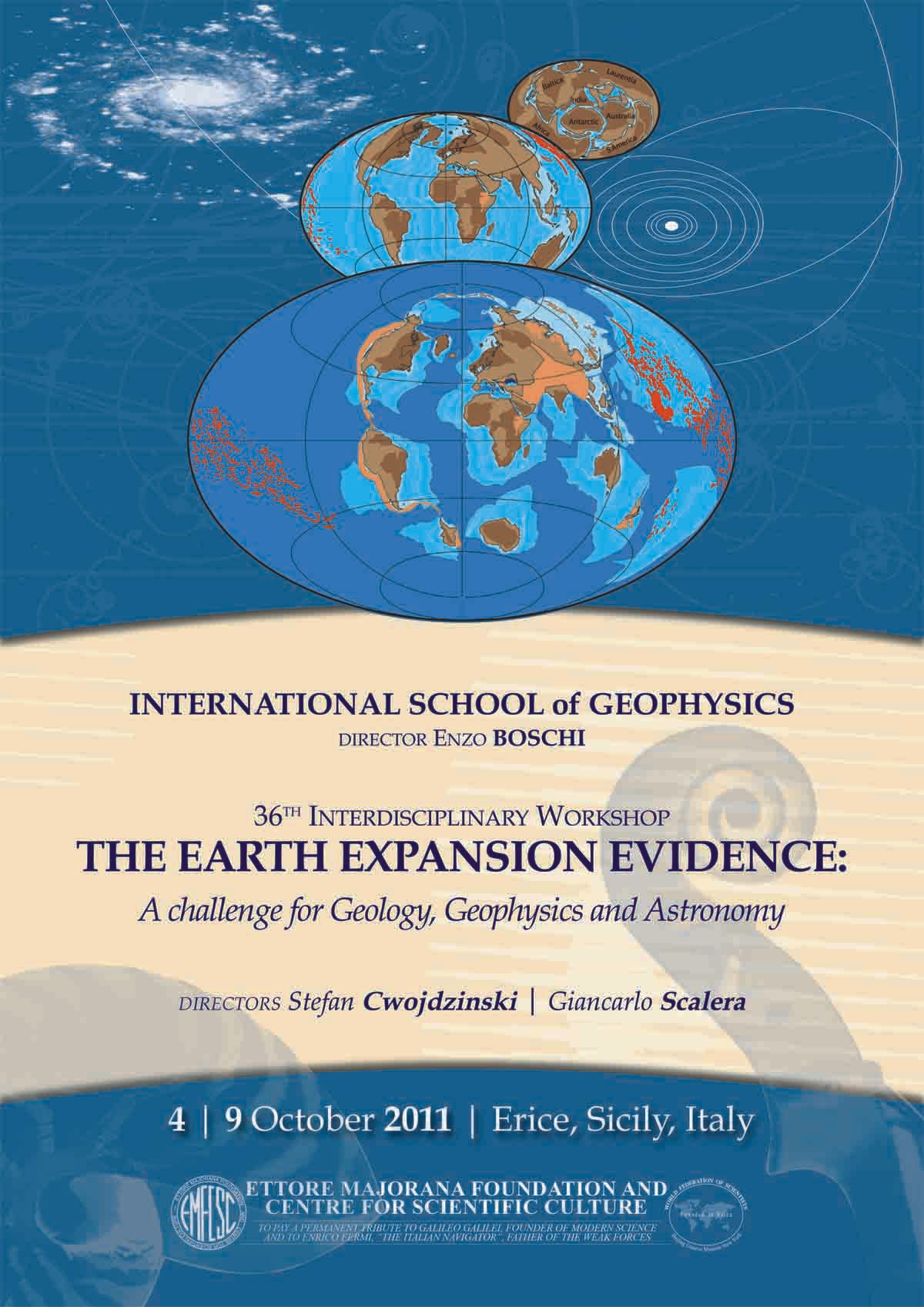 The 36th Interdisciplinary Workshop will be held on October 4-9, 2011 in the "Ettore Majorana Foundation and Centre for Scientific Culture" in Erice, Sicily, Italy. Please, inform all your colleagues interested in the Expanding Earth conceptions about this event.

The organizers invite you to participate in the workshop with oral or poster contributions.

You will find all the information, registration form, extended abstract guidelines and other additional materials on the web page of INGV (http://www.ingv.it/eng/) into the section 'Conferences and seminars'

The Director of the Erice International School of Geophysics Prof. Enzo Boschi and the Directors of the workshop Stefan Cwojdzinski and Giancarlo Scalera would like to ask you filling in the registration form, and mail it to the local secretary of the meeting:
Silvia Nardi (silvia.nardi@ingv.it); Giancarlo Scalera (giancarlo.scalera@ingv.it)

This will serve us for a better planning, to get an idea about the number of participants, and how many of them are students.
All registered participants will be added to the mailing list in order to receive the next circulars.
Don't hesitate to contact the local secretary if you have any questions.

The last century was the time for Theories: relativistic, quantum, cosmological, and Earth sciences ones. Earth-sciences followed this fashion by proposing the principles of plate tectonics. Expanding Earth, on the contrary, was not developed as a theory in the sense of a commonly accepted paradigm, but had the characteristics of a field open to new investigations, new interpretations, and new results. This situation, which can be positively considered, is evident in the differing interpretations of the paleogeographical evolution of the Pacific and Indian oceans, in the cosmological or incidental motor of expansion still to be identified, in the different estimates of the radial expansion rates of the Earth, and this is a sign of a vitality: these ideas are not to be crystallized in a few postulates from which to deduce all the answers, and to which all the data have to be constrained.
In the expanding planet schema a common explanation can be found of several outstanding problems coming from paleontology, paleomagnetism, geology and climatology.
The interdisciplinary conference will collect contributions - oral and poster - in any scientific field relevant to the solution of the outstanding problems of a framework that albeit supported by compelling evidence, still is lacking of a definite cause of the expansion. Besides topics about Geology, Geochemistry, Geophysics, Geodesy, Paleogeography, Paleobiogeography, contributions about the links Expanding Earth has with Astronomy, Cosmogony of the Solar system, Cosmology, Foundations of Physics are especially welcome. We will try to achieve that all the different versions of the expanding Earth could be represented.

Looking forward to see you in Erice,