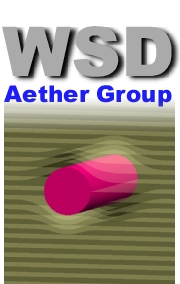 This is intended to be the very first meeting of the researchers of the Aether Group. Aether Group members and other interested NPA members are also invited to attend. As outlined in the Research Proposal dated February 14, 2010 researchers are invited to review together the experimental facts that revealed the new behavior a beam of light has after being reflected from the surface of glass or after being refracted by a double refracting crystal. The observations were initiated by Malus and were afterwards investigated by Brewster (reflection), Arago and Fresnel (interference), Faraday (interaction with the magnetic field), Kerr, Verdet and many others.

Although previous to these discoveries light was considered to be a longitudinal wave of compression in the fluid aether, unfortunately, very soon after Malus' observations, light was theorized to be a transverse wave in the aether and the term 'polarized light' was introduced. This in turn compelled physicists to consider the aether not a fluid medium any more, but a solid substance because only solid substances can sustain transverse waves. A less radical proposal was to consider that the aether was like a jelly. All these unphysical proposals to describe optical phenomena in the aether led some philosophers to question the very existence of the aether as a medium propagating the waves of light.

The meeting will focus on reviewing the experimental facts but, if time allows, researchers will have the possibility to present possible explanations of these phenomena. Other meetings on this topic will be organized at convenient intervals of time.