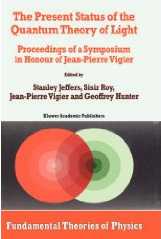 1st Vigier Symposium: The Present Status of the Quantum Theory of Light

This volume contains the proceedings of a symposium held in honour of Jean-Pierre Vigier in Toronto, Canada, in August 1995. It encompasses many areas in which he has been active over the years, such as stochastic interpretations of quantum mechanics, particle physics and electromagnetic theory. The papers have been loosely ordered in the following categories: ideas about the nature of light and photons; electrodynamics; the formulation and interpretation of quantum mechanics; and aspects of relativity theory. Some of the papers presented deal with alternate interpretations of quantum phenomena in the tradition of Vigier, Bohm et al. The current experimental situation allows for the first time for individual quantum events to be studied, and this opens possibilities for challenges to the orthodox interpretation to be realised. Audience: This book will be of interest to graduate level students and researchers whose work involves quantum mechanics, electromagnetic theory, optics and optoelectronics.