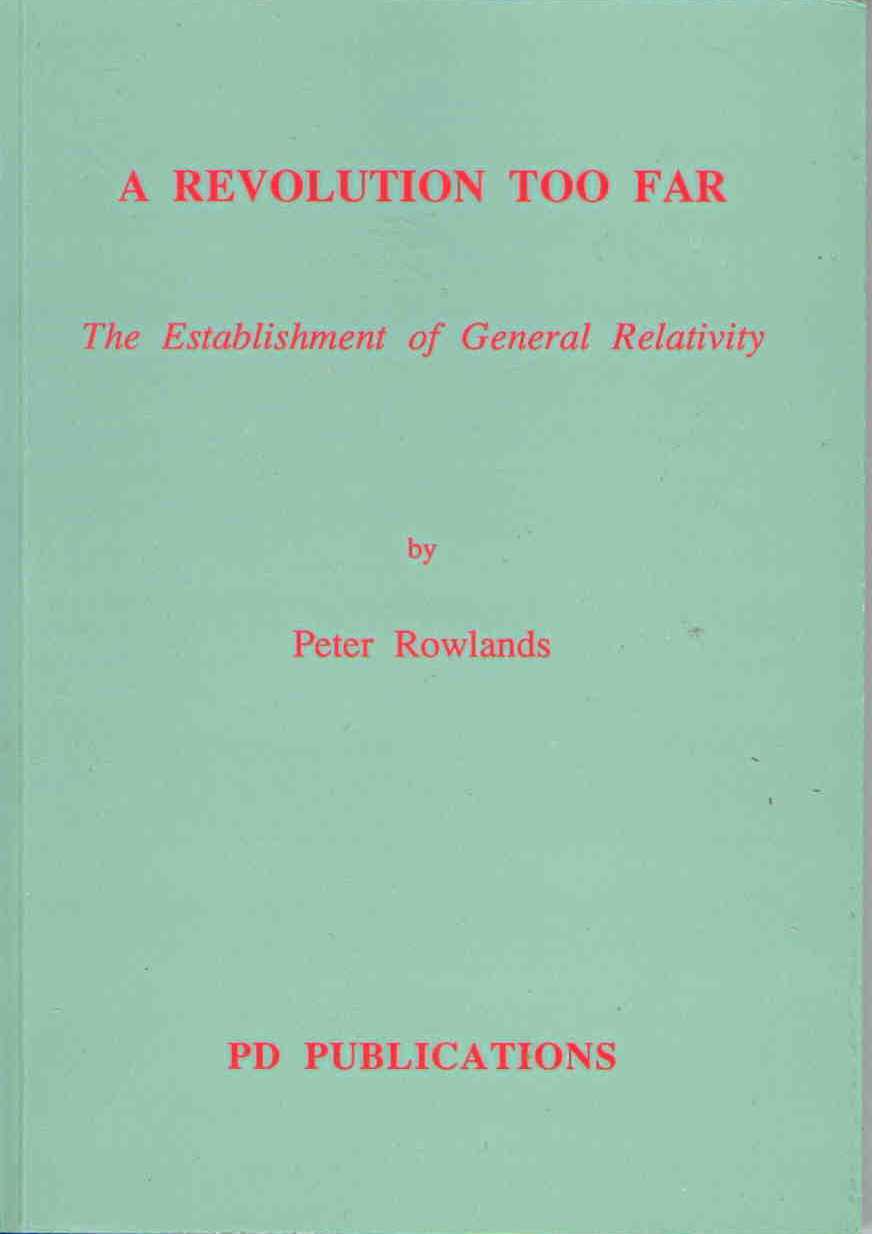 A Revolution Too Far: The Establishment of General Relativity (Buy Now)

Given that newspapers write the first draft of history, the person who manipulates newspaper coverage is the very first revisionist to mangle history.  This book begins with the 6 November 1919 joint meeting of the British Royal and Royal Astronomical Societies, which served in part as a press conference for the release of the news about Einstein?s general theory of relativity and Eddington?s solar-eclipse expedition to obtain confirmatory data.  Was it a stupendous manipulation?  Maybe so.  The situation at the time was that GRT had achieved a single prior victory, in predicting the ?anomalous? non-Newtonian part of the perihelion advance of Mercury.  This is something, but perhaps perilously little, since the GRT calculation of the anomaly involves only a fixed Sun and test-particle Mercury, and so does not  handle the much larger Newtonian part of the perihelion-advance problem, which requires free sun and other planets.  To this day, few people are aware that, in the case of perihelion advance, full solution means combined solution.

So the light bending was a much needed success.  Do you recall from somewhere in your upbringing that the essence of that success was a factor of two?  That GRT correctly gave twice the incorrect classical result?  But exactly what was that classical calculation?  The truth is, there wasn?t one, at least not prior to the general theory and the eclipse expedition and the ?results? comparison.  So proclaiming ?the? classical calculation wrong was perhaps an unfair characterization.  While it may be easy to come up with a ?classical? calculation that is wrong in the amount described, it is also easy to come up with one that yields the right result (see, for example, H. Hayden, ?Light Speed as a Function of Gravitational Potential?, Galilean Electrodynamics 1, 15-17 (1990)).  Or, one can go at it with SRT alone, as do several authors whose arguments are quoted by Rowlands.

The fact is that to this day there are only a handful of tests for GRT: the perihelion advance, and the optical effects of bending, slowing and red shift.  And none of the tests is decisive, since other less complicated theories pass the same tests.  It is a mystery that we would love the theory whose ratio of mathematical complications to verifiable predictions is maximum.  Well, given the political environment, maybe it is not entirely a mystery.  The twentieth century has been a century of revolutions.  Maybe for that reason, ?revolution? has been an appealing metaphor even in science.  GRT was appreciated as a revolution.  But now at the threshold of the twenty first century, the feeling in the air is not about revolution and domination; it is about evolution and multi-culturalism.  We shall see where that takes us.

One place it may take us is to a re-integration of the aether concept into physics.  Rowlands points out an essential irony: Einstein?s SRT and GRT are incompatible.  SRT has been understood as conferring license for an intellectual purge: aether ideas were to be driven from physics.  But GRT, in reformulating gravity as not a force between point particles, but rather a ?curvature? of space time, is the quintessential aether theory.  We just don?t say so publicly at present.

Maybe the time for purges really is over.  Maybe at last we can openly say that reality is not just the point centroids of particles we observe, nor is it just the space between the points; it is both together.  Like wave-particle duality, we need aether-point duality, and whatever new synthesis they may imply.  It won?t be quantum gravity. - Cynthia K. Whitney, Galilean Electrodynamics, V10, N4, p. 62 (Jul/Aug 1999).