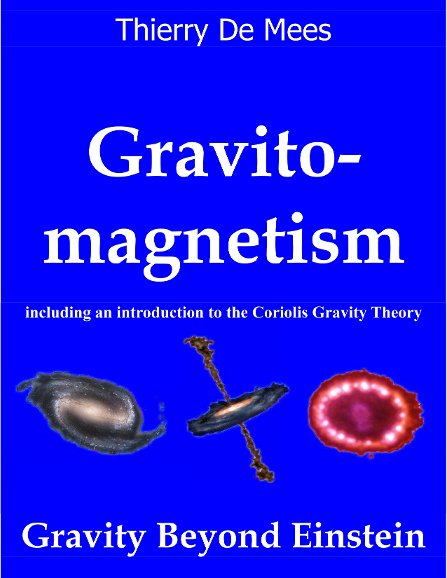 Thierry De Mees
In this book, I study the motion laws of masses where no direct mutual contact occur, but only the gravitation-related fields. We will discover a second field of gravitation, called cogravitation field, or gravitomagnetic field, or Heaviside field, or what I prefer to call Gyrotation, which form a whole theory, completing the classic gravitation theory to what we could call the Gyro-gravitation Theory.

A model is developed by the use of mass fluxes, in analogy with energy fluxes. By this model the transfer of gravitational angular movement can be found, and by that, the fundament for an analogy with the electromagnetic equations. These equations will allow us to elucidate an important number of never earlier explained cosmic phenomena.

\"Within a few pages we will be aware of the reason why our solar system is nearly flat, and why some galaxies are flat as well with in the centre a more spherical bulge. Furthermore we will know why the galaxy becomes spiralled, and why some galaxies or clusters  get strange matrix shapes. And a simple calculation will make clear why the stars of flat galaxies have approximately a constant speed around the centre, solving at the same time the ?dark mass? problem of these galaxies.We will also get more insight why the spirals of galaxies have got so few windings around the centre, in spite of the elevated age of the galaxy. Moreover we will discover the reason for the shape of the remnants of some exploding supernovae. When they explode, the ejected masses called remnants, get the shape of a twin wheel or a twin lobe with a central ring.Next, some calculations concerning certain binary pulsars follow, these are sets of two stars twisting around each other.We get an explanation for the fact that some fast spinning stars cannot disintegrate totally, and also a description of the cannibalization process of binary pulsars: the one compact star can indeed absorb the other, gaseous star while emitting bursts of gasses at the poles.An apparent improbable consequence of the Gyrotation theory is that mutual repulsion of masses is possible. We predict the conditions for this, which will allow us understanding how the orbit deflexion of the planets goes in its work.Furthermore we will bring the proof that Gyrotation is very similar to the special relativity principle of Einstein, allowing a readier look on how the relativity theory looks like in reality. The conclusions from both, Gyrotation Theory and Relativity Theory are however totally different, even somehow complementary, but not always recognised as such by the scientific world.Also more detailed calculations for fast spinning stars, black holes, their orbits and their event horizons are calculated. \"