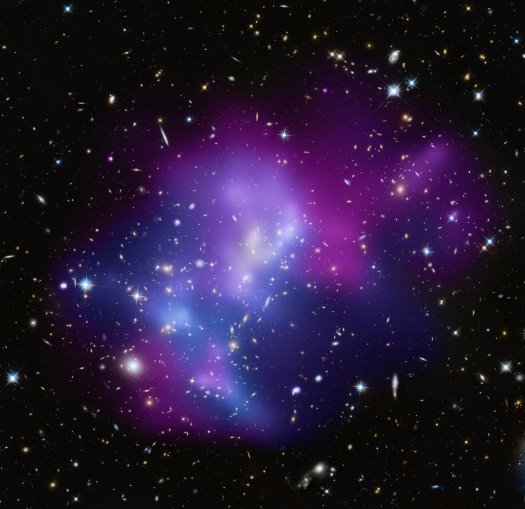 If astronomy asks "how", cosmology asks "why" the Universe is what it is. Mainstream science believes it has found the ultimate answer to the question of Universe origins with the Big Bang theory, and thus does not entertain alternative explanations. Historically, the Big Bang theory arose from Edwin Hubble's observation that the frequency of light from more distant sources is proportionately "shifted" down from the known spectra of hydrogen, helium, etc. Scientists in the 1930s compared this "redshift" with the well-known Doppler Effect, in which the frequency of a sound wave is reduced when received from a receding source. Since redshift was observed (nearly) equally in all directions, they concluded that everything is moving further away, and hence that the Universe is expanding. Further, if it has always been expanding, then it must at one time have emanated from a single point. This theory, popularly called the Big Bang, became accepted as mainstream in the 1960s.

However, there are other explanations for redshift besides a "Doppler Effect", and even accepting the Doppler idea, there could be other solutions besides a Big Bang. In the late 1960s, astronomer Halton Arp observed several redshift anomalies, in which stars at similar distances, even gravitationally linked, nonetheless produced radically different redshift values. Arp's "intrinsic redshift" throws a wrench into the whole works, because it shows that at least some redshift doesn't result from Universe expansion, but from other causes. Needless to say, neither Arp's work nor the work of the many other independent astronomers and cosmologists have received a hearing from mainstream science, despite a vast literature. Furthermore, slight differences in the amount of redshift from different directions (called "anistropies") have been observed, demanding explanation. Finally, questions have been raised as to whether the Doppler analogy between sound and light is valid, and whether "expansion" of the Universe is even meaningful, since one must ask "with respect to what" the Universe "expands".

Bottom line: many concepts in accepted modern cosmology have problems, and many legitimate questions remain unanswered. The GSF doesn't claim all the answers, but does claim the need to investigate these foundational questions with an open attitude. While mainstream science has invented the Big Bang, black holes, dark matter, dark energy, and appeals to other universes, scientists who refuse to accept these unproven concepts receive ridicule. Despite this, scientists over the last 100 years have produced many viable alternatives to explain planetary evolution, the formation and annihilation of solar systems, and ultimate questions of origins. The GSF supports both theoretical and experimental research in innovative cosmology.