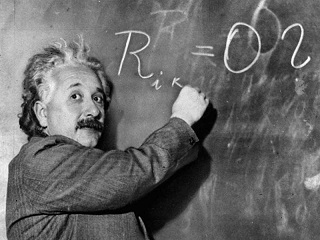 In 1999, Time magazine dubbed Albert Einstein "Person of the Century" for his innovative and paradigm-breaking theory of relativity, which supposedly redefined time and space themselves. Yet the man on the street understands little of Einstein's ideas, except that they lead to warped space-time (whatever that is), an expanding universe, black holes, worm holes, an ultimate speed limit at the "speed of light", and the possibility of time travel. Most students in science encounter Einstein in a physics course, and solve a few problems, but never quite get comfortable with the ideas, and rarely use them in any practice anyway. Most people believe relativity essential to the development of GPS, though GPS scientists actually use Newtonian physics, to the details of particle physics, though it remains grossly incompatible with quantum mechanics, and to space travel, though nothing has ever returned from space at a younger-than-expected age.

Einstein's relativity has spawned many books, papers, and theories pointing out basic flaws and many paradoxes. Here are some of the people and works involved in these studies spanning 100 years.