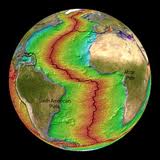 The earth is definitely expanding or growing. The most obvious evidence is from the seafloor ages as described by the National Geophysical Data Center and NOAA Satellite and Information Service (http://www.ngdc.noaa.gov/mgg/image/crustalimages.html) It is easy to see that expansion happening all over the globe in all directions. Plate tectonics says that the Pacific is "different" in that the sea floor that is know to be growing is be eaten up (subducted) around the Pacific rim. The evidence for this is shaky at best.

There are many problem the current (and newer) plate tectonic theory cannot explain including the fact that when you take away the seabed floor piece by piece in reverse order of its age, that all the continents fit together with little or no modification. "Expansion" tectonics is now going through a renaissance with many geologists around the world looking towards expansion tectonics for predicting where new oil fields are located, and where and when earthquakes will happen.

The biggest questions people have are two-fold with expansion tectonics: 1) what is causing the expansion, 2) where did the water come from and why wouldn't the earth be all covered in water 200 million years ago when the planet was smaller.

Although there are numerous theories as to why mass expands, one particular hypothesis is actually quite easy to follow. The earth's core is a nuclear furnace like the Sun's and it was a critical mass attained in this thermal nuclear reaction around 200 million years ago that started to increase the volume of the earth's core, cracking and expanding the continent shell resulting in the new seafloor and seafloor ages we see on the NOAA map.

Being a core like the sun, there are well-known processes make larger and large atoms with immense heat and pressure inside the earth. Water, methane, and oil are produced inside the earth over time so there was less water 200 million years ago and lots of shallow lakes. This solves the big problem with plate tectonics of where water came from on earth - not from comets (which some say are fiery), but from within. Oil by many is now considered to be most all produced from inside the earth, and not from fossils (which account for only a small part of oil).

Finally, expansion tectonics explains the "moving" of the South Pole very cleanly (see http://www.jamesmaxlow.com). Its position is well known during the last 200 million + years and can easily be explained by an expanding earth.