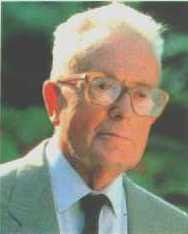 Maurice F?lix Charles Allais is a French economist, and was the 1988 winner of the Nobel Memorial Prize in Economics "for his pioneering contributions to the theory of markets and efficient utilization of resources." - Wikipedia

Born May 31, 1911, Maurice Allais came from a modest family: father shopkeeper, grandfather carpenter.  His father, taken prisoner in the 1914-1918 war, died in Germany in 1915, affecting Allais deeply.  In spite of his young age, he then swore to honour his father's name.  He kept his word.

Late in life, Allais took an interest in the work of Dayton Miller, and produced a series of papers on the subject.  All the scientific work of Maurice Allais relates to the field of the gravitation, the velocity of the light and the anisotropy of space.

Maurice Allais, initially, carried out his own experiments which led him to observe the existence of phenomena incompatible with the commonly accepted theories. He drew from them his own conclusions according to which the velocity of the light does not have a constant value but varies (slightly) according to the direction. What led him to show the existence of " aether " and of the anisotropy of space.

In a second time and to consolidate his own results, Maurice Allais was brought to reexamine  the detail of the results of the experiments which had been carried out in the past on the same subject in the U.S.A. by Michelson and Morley in 1887, by Morley and Miller in 1902, 1904 and 1905, and by Miller in 1925, 1926 and 1930. He then could observe that these results contain the same anomalies which were not noticed at the time by the experimenters  or were neglected.

Maurice Allais affirms today with force that these anomalies are real and indisputable and that they call into question the laws of relativity, discovered by Lorentz and Poincar?, and more known under the name of Laws of Einstein.

Papers by Others (related to Maurice Allais):