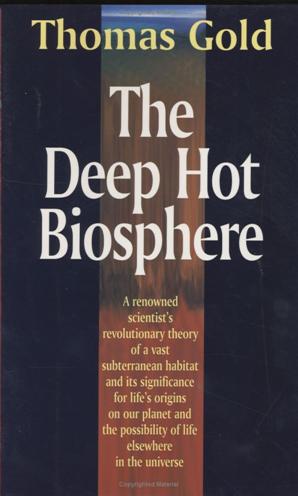 Websites: en.wikipedia.org/wiki/Thomas_Gold
When scientists discovered thermophiles?primitive microorganisms that live in deep seafloor vents and eat hydrocarbons (chemicals like gasoline)?experts assumed the mysterious bugs had little to tell us about ourselves or about the earth's core. Cornell University Professor Emeritus Gold, however, who for 20 years directed the Cornell Center for Radiophysics and Space Research, here proposes the striking theory that "a full functioning... biosphere, feeding on hydrocarbons, exists deep within the earth, and that a primordial source of hydrocarbons lies even deeper." Most scientists think the oil we drill for comes from decomposed prehistoric plants. Gold believes it has been there since the earth's formation, that it supports its own ecosystem far underground and that life there preceded life on the earth's surface. The "deep hot biosphere" hypothesis would explain the thermophiles, the minerals and the oil Swedish drillers found in 1990 under rock where no one expected them. The hot goo and massed gas far under our feet would also explain some mysterious historical earthquakes (notably the New Madrid, Mo., shocker of 1811), and it would tell puzzled geologists why so many oil reserves just happen to sit underneath coal fields. As later chapters explain, if Gold is right, the planet's oil reserves are far larger than policymakers expect, and earthquake-prediction procedures require a shakeup; moreover, astronomers hoping for extraterrestrial contacts might want to stop seeking life on other planets and inquire about life in them.

View count: 1
Buy it now
The Nature of Time
by Thomas Gold