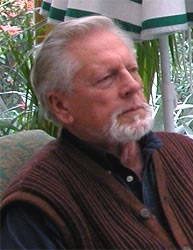 Geoffrey's life has been almost exclusively devoted to formulating and elaborating a coherent theory of the universe. In effect, this entailed the construction of a rational synthesis embracing all human knowledge and experience, which, though highly general, would yet be firmly and minutely grounded on particulars. He embarked on this endeavor in late 1947 whilst still a post-graduate student of London University (in History and Philosophy of Science), and has been fully engaged on it ever since. Although without private means, Geoffrey was able to secure the requisite leisure by confining his paid employment to a few hours lecturing a week, principally in mathematics.

This long course of thought and study finally bore substantial fruit in January 2003 with the publication of ?The Coherent Universe. An Introduction to Geoffrey Read's New Fundamental Theory of Matter Life and Mind' by Peter Hewitt. (See Home Page). Prior to this, Geoffrey had contributed a chapter section to "The Relevance of Bliss. A Contemporary Exploration of Mystical Experience" by Nona Coxhead (Wildwood, 1985). He had also, between 1972 and 1982, given four terms' lectures at the Richmond Adult College on ?Theory of the Universe'. From 1990 to 1992 he was an active member of ANPA (Alternative Natural Philosophy Association), an international group of mathematicians, physicists, philosophers, information theorists, etc. which meets annually under the aegis of Cambridge University. Finally, between 1973 and 2004 he wrote many philosophical papers, most of which were read at meetings of various societies, among them ANPA, the Society for Psychical Research, and the South Place Ethical Society; but most frequently, at working groups within the Scientific and Medical Network. (www.scimednet.org).A small number of these can be read on this website. Geoffrey joined the SMN in April 1978, and played an active part therein during the first half of the ?90's. It was at the Annual General Meeting of 1989 that he first met fellow-member Peter Hewitt. A community of outlook and interests eventually led to a collaboration. This continued, though with long interruptions due to Peter's ill-health, from the late summer of 1994 until Peter's death in January 2004.

At present, Geoffrey's main preoccupation is his ongoing e-book entitled Theory of the Universe. Although grounded on precisely the same ontology as The Coherent Universe, it seeks to transcend this work in all that pertains to a comprehensive exposition as distinct from an introduction.