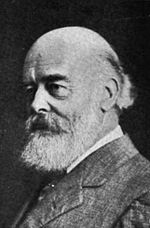 Lodge is notable for his work on the aether, a now deprecated theory, which had been postulated as the wave-bearing medium filling all space. He transmitted radio signals on August 14, 1894, at a meeting of the British Association for the Advancement of Science at Oxford University,[6] one year before Marconi but one year after Tesla. Lodge improved Edouard Branly's coherer radio wave detector by adding a "trembler" which dislodged clumped filings, thus restoring the device's sensitivity. Lodge also carried out scientific investigations on lightning, the source of the electromotive force in the voltaic cell, electrolysis, and the application of electricity to the dispersal of fog and smoke.

Lodge is also remembered for his studies of life after death. He first began to study psychical phenomena (chiefly telepathy) in the late 1880s. After his son, Raymond, was killed in World War I in 1915, Lodge visited several psychics and wrote about the experience in a number of books, including the best-selling "Raymond, or Life and Death" (1916). Altogether, he wrote more than 40 books, about the afterlife, aether, relativity, and electromagnetic theory.