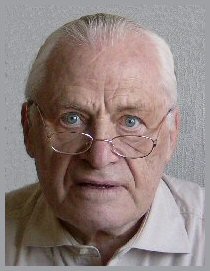 Ekkehard Friebe was born in 1927 in Hanover, and - after returning from American captivity - in 1953 at the Technical University of Hannover earned his diploma degree in Electrical Engineering (energy technology). When he was almost 10 years in the industry (Siemens) as a development engineer. In 1963, he was Munich from the German Patent Office as a patent examiner appointed. Since 1979, he is intensely as a subsidiary with the basics of physics and has held numerous lectures and publications released. Since his retirement in the spring of 1989, this issue deepened further attention.

Mr Friebe has addressed in June 2008 to Prof. Dr. Gerd Litfin, the President of the Deutsche Physikalische Gesellschaft (German Physical Society) a detailed inquiry about the experiment Hafele & Keating (1971), which is for decades under suspicion of manipulation of measuring results, with evidence of critical analysis of this experiment by a large number of scientists worldwide (A.G. Kelly, G.O. Mueller, Walter Theimer, Domina Eberle Spencer, Dr. Uma Y. Shama. etc.). The request for investigation of this experiment was rejected in August 2008 without examination results. The complete correspondence: