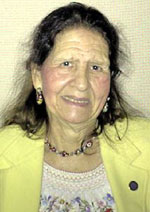 Domina Eberle Spencer, born in 1920, came to MIT as a high school student in a summer program and stayed on to earn three degrees, her SB in Physics in 1939, SM in Mathematics in 1940, and PhD in Mathematics in 1942. A Professor of Mathematics at the University of Connecticut for the last half century, she has also taught at American University, Tufts, and Brown University. During the 1950s, Spencer co-authored a series of articles with Prof. Parry Moon (1898-1988) on electrodynamics and induction based on Ampere's original force law, deriving results contrary to Einstein's theory of relativity. The Moon and Spencer duo united their efforts through marriage, and went on to write several textbooks in the 1960s, including their unique and useful Field Theory Handbooks. After Moon's death in 1988, semi-retired Spencer became very active in alternative physics. She co-founded the Natural Philosophy Alliance (NPA) in 1993 and remains the organization's president, having presented over 50 times at its annual meetings. At age 88, Spencer continues to develop her unique New Gaussian Electrodynamics, which operates without Einstein's relativity. In all, she has authored a staggering 300 technical articles during her long career. Her alternative theory is in the Gaussian-Weberian-Ritzian tradition, and she agrees with Gauss that the most fundamental task of electrodynamics is to discover the correct equation for the force between relatively moving charges.