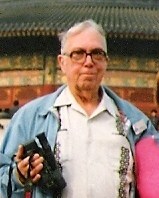 Born in Portland, Oregon, Ernest Wilbur "Bud" Silvertooth grew up in Long Beach, California.  Identified as a genius by the early IQ tests of Stanford's Lewis Terman, he was placed in Terman's special program for gifted youth.  Through this, he had the opportunity to meet Albert Einstein at age 14, and challenged the great man about the validity of relativity theory.  Einstein admitted that Silvertooth might be right.

Specializing in optics, he received a B.S. in physics from Caltech in 193?.  His graduate work there was so exceptional that it caught the attention of Paramount Studios, who offered him a position working on special effects for their films.  Better paying than a university position, the job was too much to resist in the Depression era, but it also meant that he would never complete his advanced degrees.   Among other honors, a 1941 Scientific or Technical Award Oscar was "To WILBUR SILVERTOOTH and the PARAMOUNT STUDIO ENGINEERING DEPARTMENT for the design and computation of a relay condenser system applicable to transparency process projection, delivering considerably more usable light."

Later Silvertooth was recruited into an air force "think tank" with Aerospace Corp.  His classified work was never discussed at home, so that unfortunately his wife Muriel knows nothing about his accomplishments there.

However, his most important, though unsung, work began upon retirement.  Silvertooth was among the first, along with Stephan Marinov, to experimentally demonstrate the anistropy of light due to the motion of the Solar System through space.  Though arguably deserving a Nobel prize, his work was rejected by most peer reviewed journals.  It was fortunately preserved for us in Galilean Electrodynamics and other dissident journals.

Bud Silvertooth passed away in a nursing home in Bellingham, Washington on September 24, 2000. His wife Muriel still lives in his Orcas, Washington home and can be reached at shekinah2@rockisland.com.