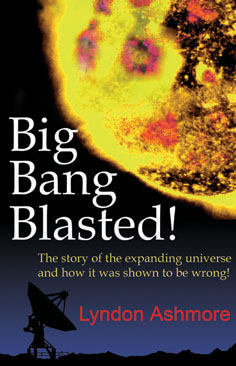 Websites: www.lyndonashmore.com
Is the Universe really expanding? When the Big Bang Theory was first conceived it looked good - but since then, result after result has gone against the theory. Instead of rejecting the model, as we are told 'real Science' should do, mainstream scientists have continued to invent patch after patch in a bid to save it - but in doing so, the theory has lost its experimental support.

What the author has done here is to go back to the beginning and start again. He follows the history of the Big Bang and the characters involved - explaining at every step how it was done.

He then introduces 'Ashmore's Paradox' and shows that after all these years of searching for the Hubble constant, all they ended up with was something any schoolchild could have found by recalling three very common physical constants from their calculator memory!

Lyndon explains that redshift - originally thought to show that the Universe is expanding, is just an effect caused by photons travelling through space and losing energy to electrons. From this, he goes on to explain the CMB and other observations normally associated with an expanding Universe. - Back cover