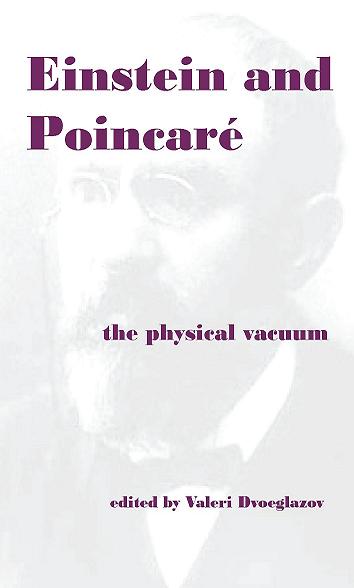 Websites: redshift.vif.com/BookBlurbs/EinsteinPoincare.htm
Seminal contributions to the development of modern physics were made by two figures, Einstein and Poincar?, in the early years of the 20th century. Both are associated with the mathematical development of relativity. However, their ideas have also influenced modern researchers working to understand the role of the physical vacuum. This collection of essays represents a milestone in the development of a theory of plenum in physics.

This book is dedicated to significant contributions made to physics by Poincar? and Einstein 100 years ago. As we celebrate the International Year of Physics, we might ask: Is Physics in good health? Everyone has his own answer to this simple question. Consequently, we decided to publish this book under the intriguing title ?Einstein and Poincar?: the physical vacuum.? The reader may be puzzled by the choice of theme, which would seem to have been fully studied years ago. We fully sympathize with him: it was and is indeed astonishing for us that after more than 100 years of research the topic is still full of surprises. In a way, it has a life of its own. The highly respected authors of this volume appear to have agreed with us in presenting their thoughtful pieces of research. These are Profs. Vigier, Duffy, Selleri, Kholmetskii, Barbosa, Sidharth, Munera, Onoochin and Weber, Pierseaux, Cahill, Krasnoholovets, Martin and Roscoe. Special thanks to them all! While their papers speak for themselves, I feel compelled to say few words for myself.

Proceedings of the International Workshop entitled Lorentz Group, CPT, and Neutrinos, held in Zacatecas, Mexico June 23-26, 1999. The unifying theme of the workshop was to address work on the role of the Poincare group and the discrete symmetries, charge conjugation, parity, and time-reversal in the development of contemporary field theories.