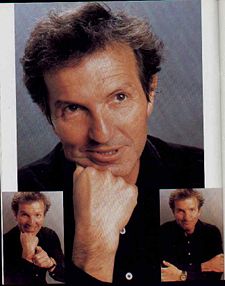 Stefan Marinov was a Bulgarian physicist, researcher, writer and lecturer who promoted anti-relativistic theoretical viewpoints, and later in his life defended the ideas of perpetual motion and free energy. He committed suicide in Graz, Austria on July 15, 1997.

Marinov was born on 1 February 1931 in Sofia in a family of intellectual communists. In 1948 he finished Soviet College in Prague, then studied physics at the University of Prague and Sofia University. He was an Assistant Professor of Physics from 1960 to 1974 at Sofia University. In 1966-67, 1974, and 1977 he was subject to compulsory psychiatric treatment in Sofia because of his political dissent. In September 1977 Marinov received a passport and he successfully emigrated out of the country, moving to Brussels. In 1978, Marinov moved to Washington, D.C.. Later he lived in Italy and Austria. In his later years, Marinov earned a living as a groom for horses.

Marinov was known for his sly sense of humor and fiery personality. One of his interests was the quest for "free energy" sources via construction of toy theories (new axiomatic systems that putatively describe our physical reality) and their experimental testing against the mainstream physical theories. In 1992 Marinov wrote a letter to German Federal Chancellor Helmut Kohl in support of a German company, Becocraft, that was doing research into "free energy" technologies and had recently been the target of lawsuits. In the letter, Marinov threatened to set himself on fire at the steps of the German parliament if Kohl was not willing to intervene in favour of Marinov's associates.

On July 15, 1997, Marinov fell to his death from a staircase at a library at the University of Graz. He was 66 years old and was survived by his son Marin Marinov, who at the time was a vice-Minister of Industry of Bulgaria.

Word has been received of the tragic, apparent suicide of new energy researcher, Stefan Marinov. The police explanation is that Dr. Stefan Marinov killed himself, on July 15, 1997, jumping from the University of Graz (Austria) Library building (Bibliotheque).

We are glad that we were able to publish some of his last work (see Experimenter's Corner, IE #12.) and will be publishing more in the future. We are very saddened to hear that such a brilliant, intense man has left us, but we can still learn from him. - Eugene Mallove, Infinite Energy #13

An Obituary Note about Stefan Marinov

I was appalled by word of Marinov's suicide. For a professed Christian (about which he and I had corresponded) this is like saying, ?OK, Lucifer, you win! I give up!? Marinov, in my opinion, was a real genius in the sense that he very well understood all of the classical theoretical physics in great detail (sufficient detail to argue that historically some wrong turnings had been taken, and that Maxwell's Equations as we normally see them can be readily disproved by a large number of table-top Faraday/Ampere type of experiments) and yet was an exceedingly good experimentalist who invented and had built and tested a large number of very complicated electromechanical & hydro-electromagnetic devices & systems.

A native of Bulgaria (and former Assistant Prof. of Physics from 1960 to 1974 at Sofia University), on certain occasions in 1966-67, 1974, and 1977 he was forcibly confined to mental hospitals and given psychiatric ?treatment? because of political dissent. In 1977 he got a passport and in 1978 lived in Washington, D.C.; later he lived in Italy and  Austria.  He was fluent in both English and German. He was involved publicly with many quarrels with the Editor of Nature who refused to print either his papers or his Letters to the Editor. He retaliated by somehow securing the funds to place full-page ads in Nature expressing his frustration with the dogmatic attitude of the Establishment.

He claimed to have seen in operation and learned the secret of the so-called ?Swiss ML converter? or TESTATIKA electrical generator [which appears to get free energy from nowhere],which was discovered by Paul Baumann (?by inspiration rather than human effort?), who is the head of the 500-member Christian religious commune METHERNITHA in Switzerland, which says they generate most of the electricity for hundreds of people via such ?perpetuum mobile? generators, which they are unwilling to share with this fallen world. He was supposedly the only member who did not live in the commune. He tried many times, but failed, to persuade them to share their allegedly great discovery with the remainder of mankind.

He wrote a book ?Divine Electro-magnetism? [available from East West Affiliates in Austria at Morellenfeldgasse 16, 8010 Graz, phone (0316) 37 70 93, for $70 + S&H] giving his take on the flaws in classical EM as now taught and how allegedly ?high-school level experiments? can flatly disprove some parts of it in favor of other versions buried in now- forgotten old literature before the present version was settled on and now handed down by the Establishment dogmatically.

He earned his living by being a groom for horses but he was a prolific writer & inventor in German and had a large following who subscribed to his journal Deutsche Physik.  His targets were schoolchildren not yet brainwashed by the Establishment into accepting false but dogmatically-taught ideas.  He was dead-certain that he had disproved all kinds of dogmatically-taught aspects of conventional electromagnetism, (Lorentz-Ampere Force Law, speed of light, special relativity, ether, Michelson-Morley, etc. - sadly, my memory is hazy, so I may not be recalling his protests correctly).

In studying the first edition of his book, I found a mistake in vector calculus and wrote to him, but he sent me the second edition in which another mathematician had already corrected him.   He was one year younger than myself (I turn 67 tomorrow) but seemed much younger (?45 or 50?) and was an extremely vital and extraordinarily magnetic /charismatic/ enthusiastic and attractive person. I met him in Denver more than a year ago and handed him $100 cash which I had owed him for the 2nd Edition which he had trusted me to pay but on which I was about a year late [though he readily forgave me]!). I can understand his being ?worn out? by the utterly monolithic refusal of the Establishment to listen to his allegations that he had measured ether drift (or whatever) and found in it the rotation of the earth (i.e. some diurnal variation  - or whatever, my recollection is hazy).  Perhaps he had measured a diurnal variation in the speed of light; my memory is hazy.  The one thing I remember is that the blueprints for his numerous devices all looked very professional & convincing and the photos of his devices looked like they had really been built, yet he had evidently also spent many thousands of hours on extremely complicated mathematical calculations in most of which I could find no mistake.  (Few theoreticians are sufficiently versatile to be electro-mechanically creative experimenters!) He published detailed plans for a hydraulic-electro-magnetic perpetuum mobile and showed photos of it in operation, but nobody ?important? paid the slightest attention to him. What a tragedy!