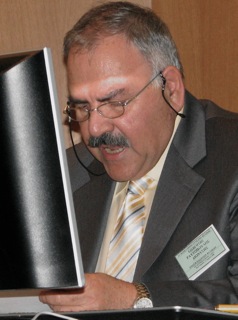 View count: 1
The Theory of the Harmonicity of the Field of Light (Volume A)
by Dionysios G. Raftopoulos

"Time makes fools of us all. Our only comfort is that greater shall come after us".

To you that might be alive or not even born yet and from whose mouth dissent will spring, I dedicate this to you. Whether you are black or white, rich or poor I don't really care; as long as the convictions of the herd will never you deter. Just plough right ahead showing no fear or neglect, ?cause the infallible mind?s time has surely not come yet. The Principles is where the Fault lies buried deep, and that?s where I?ll be waiting for you to come and meet. But hurry not to reach your Ithaca too fast, or Life?s feast for you will certainly not last. Just slowly sip the sweet adventure, drop by drop, the bitter Knowledge too; and when at last we meet, don?t you complain of a youth squandered down the pit. Because your risky trip in vast, untamed waters, has provided for you my friend, all that really matters?"

The Theory of the Harmonicity of the Field of Light is dedicated, from the bottom of my heart, to the one who will certainly one day overthrow it and replace it with a new, substantiated and better one...

A Brief Prologue to the English Publication

The emergence of the Theory of the Harmonicity of the Field of Light, thirty-one years ago, was induced by a rather simple question that had tortured me for a very long time: How could it be possible, according to Einstein?s Theory of Special Relativity, for clocks moving in a uniform rectilinear translatory fashion to slow down, on account of that motion alone when, by hypothesis, the uniform rectilinear translatory motion of matter is relative.

The answer ought to be obvious: It cannot!

Because if the conclusion was valid, i.e. if clocks do slow down then, certainly, the one delayed would have to be the one that moved absolutely, a fact that comes into contradiction with the hypothesis that dictates uniform rectilinear motion to be relative. Hence, Einstein?s Theory of Special Relativity contains a fundamental error, as one of its conclusions comes into direct contradiction with one of its hypotheses.

Thus, the driving force behind my continuing 30-year research endeavor has been simply the wish to restore Human Reason, as defined by Aristotle, and to defend Common Sense.

In addition, over the passing years, I also came to realize that modern day Physics has been (and is still being?) built in a totally ?Babylonian? fashion, i.e. as a confused clutter of empirical observations, the coherent explanation of which requires the fabrication of a constantly increasing number of convenient, per case, ?gods? or ?demons?.

A direct result of such an approach to Science is, to my mind, the emergence of disconnected and diverging disciplines such as the General Relativity and Quantum Mechanics theories, the unifying synthesis of which would most probably require yet another convenient ?god? or ?demon?.

The Ancient Greek way of reasoning was, however, totally different:

It explained the phenomena on the basis of Primary Principles which are first and foremost stringently formulated, then safely ?locked? and only then considered solid enough to form on their own the basis for the synthesis, without the need to evoke any kind of ?god? or ?demon?.

This kind of reasoning prevails in this work, where I?ve tried to achieve in Theoretical Physics what Euclid, so long ago, had achieved in Geometry namely the reduction of Babylonian empirical observations to Primary Principles.

And the name I?ve chosen is in tune with its purpose as, according to Aristotle, ?Harmony? is the unity and completeness of the whole, is unity in diversity

I am grateful to those who, one way or another, stood by me and supported my efforts and specifically: Marianna Gotsoulia, Nikolaos J. Margaris, Leonidas Perdikas, Anastasios Skourogiannis, Joanna Skourogianni, Antonis Tsamantakis, Theodoros Tsiboukis, Anastasios Tsirkas and the late Prof. Jean-Pierre Vigier.