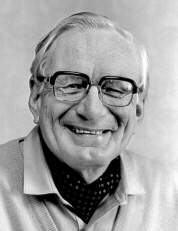 Norman Spencer developed models of the expanding earth. See his website for pictures of these models.

He was educated at Wellington College and Victoria University of Wellington, graduating MCom in commerce and economics.

In business, he was a Public Chartered Accountant, Management Consultant, and New Zealand Managing Director of W.R.Grace & Co (of New York). Since retirement, in 1979, he was engaged with research and writing.

His work on prediction science began in 1968, when he became frustrated with the lack of data available to aid strategic planning in business. He resolved to gather his own data, and developed 44 hypotheses, or 'propositions', that formed the basis of his 'propositional network'.

Work on the propositional network continued through the years, and increased greatly after his retirement from business in 1979. Eventually, after an estimated 20,000 hours of effort, the propostions numbered 10,615, and dealt with an extemely broad range of topics.

Beginning in 1989, he produced annual predictions for the year ahead. These were published in the Evening Post, a Wellington newspaper. These forecasts covered global as well as domestic events, and he claimed 90 percent accuracy for them.

He wrote a number of books, including two which make up the bulk of the material on this website - Prediction Science and The Next 60,000 Years.

Prediction Science lists the hypotheses that make up the propositional network. It also includes an index to the network, and explanations of the underlying theory.

The Next 60,000 Years examines the long term future of the human race. It predicts that the human race will not destroy itself, that it has a bright future, and will colonize the stars.