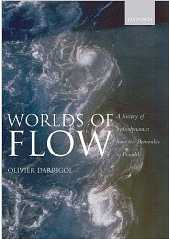 View count: 1
Buy it now
Worlds of Flow: A History of Hydrodynamics from the Bernoullis to Prandtl
by Olivier Darrigol

'This is a book that all practising fluid dynamicists must read: I hope there will be a paperback edition soon, so that the strange history of the subject that Darrigol describes with such insight will become part of the intellectual legacy of interested students in engineering, mathematics and physics.' - Nature

'This book deserves a place in every university library, and it will surely be read with much interest, and some surprise, by many applied mathematicians.' - Alex D.D. Craik, University of St Andrews, The London Mathematical Society Newsletter 2006

'The book is a valuable contribution to its subject and is likely to provide new and perhaps useful insights to those studying fluid dynamics. It is well written and produced.' - D.H. Peregrine, Mathematical Reviews

'By presenting in detail the interactions between many mathematicians and engineers, and by emphasizing the different styles characteristic of scientists in different countries, Darrigol has provided a fascinating insight into the development of hydrodynamics.' - J. Stewart Turner, Australian National University, Canberra, August 2006, Physics World 2006

View count: 1
Buy it now
Electrodynamics from Ampere to Einstein
by Olivier Darrigol

Read it now online
Three quarters of a century elapsed between Amp?re's definition of electrodynamics and Einstein's reform of the concepts of space and time. The two events occurred in utterly different worlds: the French Academy of Sciences of the 1820s seems very remote from the Bern patent office of the early 1900s, and the forces between two electric currents quite foreign to the optical synchronization of clocks. Yet Amp?re's electrodynamics and Einstein's relativity are firmly connected through an historical chain involving German extensions of Amp?re's work, competition with British field conceptions, Dutch synthesis, and fin de si?cle criticism of the aether-matter connection. Darrigol's book retraces this intriguing evolution, with a physicist's attention to conceptual and instrumental developments, and with an historian's awareness of their cultural and material embeddings. This book exploits a wide range of sources, and incorporates the many important insights of other scholars. Thorough accounts are given of crucial episodes such as Faraday's redefinition of charge and current, the genesis of Maxwell's field equations, or Hertz' experiments on fast electric oscillations. Thus emerges a vivid picture of the intellectual and instrumental variety of nineteenth century physics. The most influential investigators worked at the crossroads between different disciplines and traditions: they did not separate theory from experiment, they frequently drew on competing traditions, and their scientific interests extended beyond physics into chemistry, mathematics, physiology, and other areas. By bringing out these important features, this book offers a tightly connected and yet sharply contrasted view of early electrodynamics.