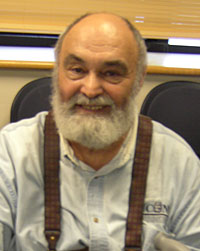 I was born in Leningrad in April of the year 1940. My father Gr. V. Klyshin worked as an engineer at tank plant. My mother, in her girlhood A.Y. Paletskaya, was a singer in the Leningrad Opera Theater at that time. Her father (my grandfather) was the grand grandson of a Polish insurgent exiled to Siberia for participation in the Kostzushko revolt against Russia. Her mother (my grandmother) was Georgian. I know nothing about her. My father's father (my grandfather) V.A. Klyushin worked as head of Kronstadt electric-power station during the year 1917 of the revolution. Kronstadt is a military sea base just near St. Petersburg (later Leningrad, and again St. Petersburg since 1991). He was said to be a man of soft benevolent character. He always tried to help everybody. Therefore his subordinates liked him.

My father inherited these features, and I did as well, it seems, though sometimes I feel the rebellious character of my other grandfather, and the emotions of my Georgian grandmother. My father's mentality helped him twice or thrice in his life. Kronstadt seamen were shock troops of the Bolshevik revolution. During the insurrection in October 1917, all fleet higher officers were killed in Kronstadt. My grandfather preserved his life even though his duty corresponded to vice-admiral rank. The station workers defended him. This was repeated in March of 1920, when the Kronstadt seamen already rebelled against Bolsheviks. The insurrection was suppressed under Trotsky's command. Any denunciation of any person meant that the person was em-barked into a ship hold, the ship went into the open sea, and kingstones were opened. Any chief has somebody who is dissatisfied with him. Therefore practically all chiefs of any rank were killed. My grandfather again became an exception. There were no denunciations of him. The station workers also helped my father when he tried to enter university. Only children of workers were permitted to join the university. The station workers wrote a special letter to the Bolshevik authorities to help my father.

My father's mother (my grandmother), in her girlhood A.G. Bosenko, was the daughter of a Ukranian peasant who grew rich and manged to organize the entry of his daughter into the Smolny Institute of Noble Girls, to which only daughters of noble men were usually permitted to enter. She studied very successfully, and graduated from Smolny Institute with the Big Golden Medal, a very rare award for excellent academic performance. In 1930 her husband and my grandfather, V.A. Klyushin, died after an unsuccessful appendix operation. My grandmother didn't marry again, but had, using present-day language, a 'boy-friend', Latvian by nationality. I do not know his name, but in 1937 he was arrested for 'nationalism', and sentenced to "10 years imprisonment without right to write letters." Nowadays we know this meant condemnation to death. Because my grandmother was not his official wife, she was not arrested, but just sent from Leningrad to the village Totszkoy in the Ural region, where she was allowed to live and work as a physician in accord with her previous specialty.

In May 1941 my father took me from Leningrad to her to have a rest in the village. "I shall take him in August", he said.  But on 22 of June 1941 a war between Hitlerist Germany and Stalinist USSR began. My father, together with personnel of the tank plant where he worked, was evacuated to Chelyabinsk (Ural region). He could not take me because he worked 12 hours a day without days off and could be arrested for being 5 minutes late. My mother came to me, but soon went to Chelyabinsk to her husband. It was decided that starvation in the village was not so strong as in the cities, and I was left with my grandmother for my whole life. as it turned out.

In 1949 my father went to Taganrog (Asov Sea) to work as a professor at the Radiotechnical Institute, which was organized there. We went to him, and just in time, because soon an experimental atomic bomb was exploded on the Totsky military site. I was told that after effects of this explosion are felt up till now.

By this time my father had already divorced from my mother.  She lived in Leningrad, and I with my father and grandmother in Taganrog. In 1953 my father went to work in Melitopol Agricultural Institute (Ukraine). I stayed with grandmother in Taganrog up to 1957, when I joined the Institute of International Relations in Moscow, Oriental Faculty, Burmese Language Group. There I first witnessed levitation of my Burmese lanquage teacher, which greatly impressed me, and later attracted my attention to the problems of gravity.

I studied international relations until 1962, the year when the KGB arrested me for "creation of an anti-soviet organization". The real cause was discussions that I organized among students and which were devoted to problems of democratization of the Soviet regime. The main point of my accusation was that I saw definite analogies between Hitler and Stalin. My KGB investigator told me, "You are lucky to have found yourself here nowadays. Five years ago I would do a roast beef from you."