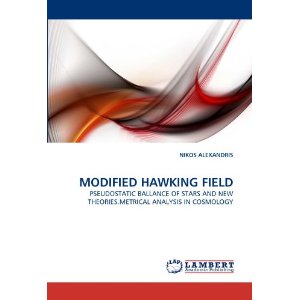 This theoretical project relates to a modified Hawking field which unifies the gravity with electricity in a cosmological level. Quantum is present through the limits of the energies such as Plank mass. The Hawking theory includes, apart from the quantum and the relativity the thermodynamical analysis. In the aforementioned analysis relativity is not present but the coefficients according to the writer?s mind appear in the deviations of the laws of the nature, such as the Wien law. The coefficient 1.976 is probably a relative coefficient and a cosmological one. Thus the Hawking field has probabilities of being tested in the laboratory of the microparticles and in macroscopical astronomical observations.. The different lengths of the denominators of the forces of gravity and electricity can possibly explain phainomena such as the missing mass of the galaxies, what we know as the dark matter. The spinning of the stars and the temperatures of the cores can assure the existence of this field. If this model I presented does not have energy losses through heat has results which can be taken advantage of empirically. Further research is demanded though, especially about the spinning of the stars and the fitting equations. The modification of Hawking mass is necessary for the supporters of this theory.