This book is one of the best I have ever seen. More than 40 physicists, among them one Nobel laureate, presented their new theories and new experimental evidence.

Kotelnikov suggested an electrodynamics which can describe also particles which are faster than light. This suggestion is in agreement with special relativity.

We know Hector Munera from his interpretation of the Michelson-Morley experiment which, according to Munera, did show an aether drift. In this book, he presented a new approach to the electromagnetic force.

Most revolutionary and far-reaching is K?hne's quantum electromagnetodynamics. His theory is a generalization of quantum electrodynamics. It includes Dirac magnetic monopoles and two kinds of photon, the conventional one which he named "electric photon" and a new one which he named "magnetic photon". His theory is the only quantum field theory of the electromagnetic interaction which can explain the quantization of electric charge, which is local, which is manifestly Lorentz invariant, which describes electrism and magnetism symmetrically, which does not require the Dirac string, and which makes testable predictions.

As K?hne pointed out, his theory violates the relativity principle.

But what is more: K?hne had presented his theory and suggested an experiment to test his theory already in 1997 (http://arxiv.org/abs/hep-ph/9708394). Now, in his contribution to this book he discussed three independent experiments which confirm his magnetic photon rays.

The far-reaching consequences of this probable discovery include:

Wow, could this mean a Nobel prize within the near future?

Anyway, this book is very good. I recommend this book to everyone who is interested in physics and/or the philosophy of science. - Peter M?ller, Amazon 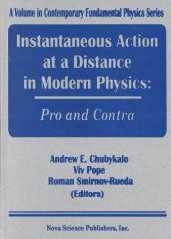