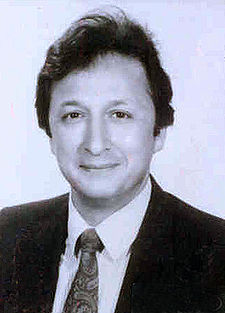 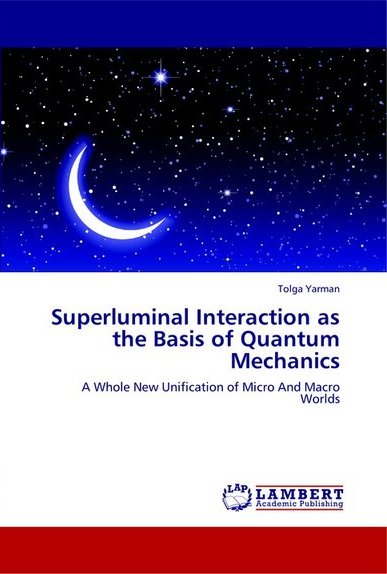 View count: 1
Buy it now
Superluminal Interaction as the Basis of Quantum Mechanics: A Whole New Unification of Micro And Macro Worlds
by Tolga Yarman

Websites: https://www.lap-publishing.com/catalog/details/store/gb/book/978-3-8454-3291-5/superluminal-interaction-as-the-basis-of-quantum-mechanics
Based on the law of energy conservation, the author shows that, the steady state electronic motion around a given nucleus in a non-circular orbit, depicts a rest mass variation, though the overall relativistic energy remains constant. This is, in no way, conflicting with the usual quantum mechanical approach. Quite on the contrary it provides one with the possibility of bridging the Special Theory of Relativity and Quantum Mechanics, to finally achieve a natural symbiosis between these two disciplines, and furthermore, elucidating the ?quantum mechanical weirdness?, simply based on the mere law of relativistic energy conservation. The author developed his theory, originally, vis-?-vis gravitational bodies in motion with regards to each other; hence, it is comforting to have both the atomic scale and the celestial scale described on just the same conceptual basis. The approach leads to the de Broglie relationship, and superluminal speeds, yet excluding any exchange of energy, making the basis of quantum mechanics. 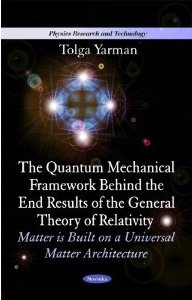 View count: 1
Buy it now
Quantum Mechanical Framework Behind the End Results of the General Theory of Relativity (Physics Research and Technology)
by Tolga Yarman

Websites: https://www.novapublishers.com/catalog/product_info.php?products_id=17502
This book provides a new approach toward the end results of the General Theory of Relativity (GTR), based on the law conservation of energy, though in the broader sense of the concept of ''energy'', thus embodying the mass and energy equivalence of the Special Theory of Relativity (STR). Thereby, the approach is solely based on this latter theory (excluding the necessity of assuming the ''principle of equivalence'' of the GTR). The author provides a theorem which basically says that if in a relativistic or non-relativistic quantum mechanical description, composed properly, the mass of the object at hand is multiplied by an arbitrary number, then the total energy of it, is multiplied by, and its size is divided by this number. This book presents data which concludes that the quantum mechanical invariance obtained between total energy, mass and size - with respect to a mass change introduced in the original wave-like description of the object - is the fundamental basis of a universal matter architecture (UMA), and insures the end results of the GTR.

Preface
About the Author

Chapter 3. RECAPITULATION: EXPECTED OCCURRENCES ABOUT A PARTICLE STATICALLY BOUND TO A FIELD, pp. 17-18

Chapter 4. DISCUSSION ABOUT THE CONCEPT OF FIELD: THE CLASSICAL COULOMB?S LAW, OR NEWTON?S LAW REIGNS IN BETWEEN, EXCLUSIVELY, STATIC CHARGES AND STATIC MASSES, RESPECTIVELY, WHILE THEIR 1/r**2 DEPENDENCY, IS A REQUIREMENT IMPOSED BY THE SPECIAL THEORY OF RELATIVITY, pp. 19-21

Chapter 5. GENERAL QUANTUM MECHANICAL THEOREM: THE QUANTITY (TOTAL ENERGY) x (CLOCK MASS) x (CLOCK SPACE SIZE)**2}, COMPOSED WITH RESPECT TO AN OBJECT, TURNS OUT TO BE A UNIVERSAL INVARIANT STRAPPED TO THE SQUARE OF THE PLANCK CONSTANT, pp. 23-35 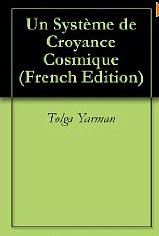 Here we would like to present a new, sophisticated, concise, ?thoroughly scientific ethic system?. We would like to call it, a ?Cosmic Wholeness?, which can be taken, amongst other things, as a basis for a ?healthy environment? and a ?most stable World Peace?.

Here are the ?basic principles? of our ideology, which consists of three phases:

The first phase embodies the ?comprehension of billions of years of evolution?, through which, matter was organized out of, an otherwise ?eternally deteriorating chaos?, gradually, into galactic, stellar, planetary, geological and biological ?supreme order?, that is, in this corner of the universe, ?ourselves?. This is, as if, a magnificent ?unconscious consciousness?, which is the ?universal know-how? (i.e. for instance, the intrinsic ability of two hydrogen atoms to manufacture a hydrogen molecule), gets transformed step by step, unto a ?conscious consciousness?, which is, at an ultimate level, fascinatingly ?us?. We thus anticipate, we are presently a ?conclusive goal? of the (originally unconscious) cosmic inclination and entity. It is true that this created us; but it's also true that this lives in ?us?, and it is ?us?. (No divine attributes are made here; yet we see no obstacles why there shouldn?t be any; at will, you may like to call this ?cosmic inclination and entity?, ?a divine being?; however according to our reasoning, you are not at all, forced to assume it). This whole process defines an ?obvious cosmological tendency? all the way from the ?Big Bang? and presumably an ?unaware consciousness?, towards a ?Conscious Intelligence? (on Earth and perhaps elsewhere), which constantly organizes the universe, out of (an otherwise eternally desperate) "chaos", into the (current universal) "order". Thence, the first phase of our Cosmic Wholeness approach, requires the ?understanding of the entire universal evolution from the Big Bang up to the present?; and this, as we show here, strikingly defines, ?a fundamental construction of the value system of our being and behavior on Earth?.

In effect, the second phase of our approach specifically consists of the grasp of ?human history on Earth?. This process of millions of years of evolution, seems to gorgeously; through all the pain, suffering, torture and bloodshed, distill (despite so many backward steps), the actual human rights, with all the related institutions, which is nothing else, but the production of ?social order? out of ?anthropological chaos?. It is extremely encouraging that, this whole struggle fits so well with the previous tendency of the ?cosmic creation of universal order out of, an otherwise, eternally desperate chaos". It is as though, that ?cosmic unaware consciousness? ascends enduringly; through the galactic, planetary and biological processes, as well as the human history, towards an ?ultimate and purest awareness?, which had created us and ?became us?, impressively, as the ?creators of the human rights?.

The third phase of our ?Cosmic Wholeness approach?, involves a derivation of ?ethics? based on the perception of the endlessly successive struggles we sketched, i.e. the ?cosmic trends? giving rise to our cradle in the universe, and ourselves in this cradle, followed by the prevailing ?driving force of human history?, which ultimately yields today's human rights. Whatever behavior in that ?direction?, should thus be classified as ?good?. Any reverse behavior, thus transforming the ?Ultimate Cosmic Order? into ?Chaos?, should be classified as ?bad?. ?Our mission on Earth? should thence be to ?comprehend? and ?support? the ?Cosmic Trends? that has given birth to ?Mother Nature? and ?us?, and carry them onward. This effort, amongst other things, includes, ?sustaining and improving a healthy environment?, ?intitutionalizing love and human rights? and ?establishing the reign of a permanent World Peace?, on Earth, together of course, with all the necessary implications.