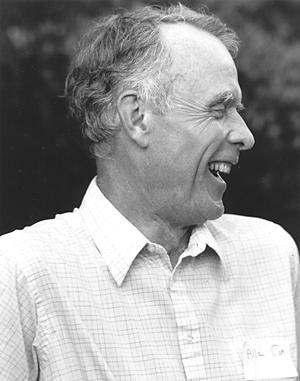 After obtaining his doctor's degree (1959) Allan joined the U.S. Geological Survey at its western headquarters in Menlo Park. There he worked with another Survey geophysicist, Richard Doell, whom he had met as a fellow graduate student at Berkeley. From these two men in the early 1960s came many important papers on rock magnetism. A major question concerned the timing of the apparent reversals in the Earth's field: did the field stay in one direction for periods of, say, thousands of years, or millions of years? Was there a regular alternation of normal and reverse fields in the past, or was the alternation erratic? Many other questions continued to intrigue Cox and Doell, but the timing of reversals remained their major concern.


To get an answer required that the rock specimens they were using be accurately dated, and this posed a real difficulty. Many of their rocks were not very old geologically, say from a few hundred thousand to several million years, a range for which accurate methods of dating were at that time not available. Very fortunately work had begun on adapting the potassium-argon method of rock dating to this time range, and even more fortunately one of the principal workers in this enterprise was a Berkeley graduate student looking for a job, Brent Dalrymple. The Cox-Doell pair arranged for the Survey to hire Dalrymple, and it was this triumvirate that succeeded in working out details of the magnetic-reversal time scale. Much of the effort was accomplished in a small tar-paper shack set up adjacent to the main Survey building--a location that seemed at the time to reflect a low estimate of the importance of rock magnetism on the part of their Survey superiors. It turned out, however, to be a particularly favorable place for their work, because of the absence of other laboratory paraphernalia that would have interfered with the measurement of very weak magnetic fields.


The work was far from easy. Samples had to be collected worldwide and their magnetic direction and age carefully determined. Some samples were not suitable for measurement because their magnetic properties had been altered since they were formed, by the action of heat or lightning or changes in their chemistry produced by solutions. A few rock specimens had evidently acquired reverse magnetization not from the Earth's field but simply because of peculiarities in their chemical composition ("self-reversal"). Such deviants caused trouble in establishing the pattern to which the great majority of samples conformed.


Despite these difficulties, the job was carried through triumphantly. Reversals had indeed occurred worldwide many times, but on a very irregular schedule. Sometimes reversed polarity had lasted only a few hundred thousand years, sometimes several million. Teams elsewhere in the world contributed similar data, and for a time there was feverish competition among the different laboratories. General agreement about the times of polarity change made it clear that a time scale or calendar could be set up showing just when the changes had occurred, and the dates could be correlated with other geologic events like volcanic eruptions and changes in fossil assemblages.


This was all impressive enough, but the most spectacular application of the reversal calendar came from another source. Rock magnetism could be measured not only on specimens in the laboratory but on rocks at the bottom of the sea, by using magnetometers carried on ships. At about the time the Cox-Doell-Dalrymple calendar was being fashioned, others were exploring magnetic properties of rocks on and near the mid-ocean ridges. In general, rocks at the high point of a ridge showed normal magnetic orientation, but on either side were belts parallel to the ridge showing the reverse direction. Then beyond these were belts of normal direction, then more reverse directions, and so on. On a map the ridge would be at the center of a pattern of stripes, the stripes representing a symmetrical alternation of normal and reverse magnetization. And the width of the stripes showed rough proportionality to the length of the times indicated by the Cox-Doell-Dalrymple calendar. This correlation between widths of stripes and times shown by magnetic reversals became apparent to Allan at a meeting where the two records were placed side by side. He describes his reaction: "I felt cold chills. This was the most exciting moment of my scientific career."