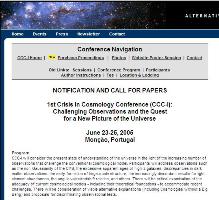 1st Crisis In Cosmology Conference (CCC-I): Challenging Observations and the Quest for a New Picture of the Universe

CCC-I will consider the present state of understanding of the universe in the light of the increasing number of observations that challenge the conventional cosmological model. Participants will address observations such as the non-Gaussianity of the CMB, the excessive apparent ages of high-z galaxies, discrepancies in dark matter observations, the early formation of large-scale structure, the increasingly discordant results for light element abundances, the angular-size/redshift relation, and others. There will be critical examination of the adequacy of current cosmological models - including their theoretical foundations - to accommodate recent challenges. There will be consideration of viable alternative explanations (including Cosmologies without a Big Bang) and proposals for discriminating observational tests.

We seek to bring together as wide a range as possible of researchers in Cosmology and related fields with the aim of furthering our understanding in the light of recent challenges to the current model. We invite presentations from both sides of the debate - from those who do, and those who do not, perceive a current crisis - that address some challenge to contemporary Cosmology.

Attendees wishing to present a paper are invited to submit an abstract of 200-500 words outlining their presentation to the Conference Chair. Deadline for submission has been extended to April 23, 2005. Abstracts will be reviewed by the Conference Scientific Committee and authors will be notified of the outcome no later than May 7, 2005. Accepted abstracts will be published online at that time. Participants will be invited to familiarize themselves with the material in advance so as to improve the quality of the exchanges. Authors may submit full paper versions of their presentations for publication in a proceedings. Submissions will be accepted up to September 1, 2005. Please feel free to forward information about CCC-I to colleagues who would be interested in the conference.