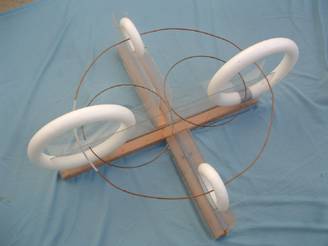 Charles W. Lucas, Jr. and David L. Bergman built a model of the atom using Faraday?s and Maxwell?s electromagnetic-field theory (which accounts for Newton?s three Laws of Motion). These properties are demonstrated to be the result of electromagnetic forces working in the spinning-ring model of the atom. The proof of a model?s ability to represent the atom is whether accurate predictions can be made from it. The spinning-ring model has ?correctly predicted features of the periodic table of elements and the spins of all 1,500 nuclides that have been measured?.

In the model shown, white Styrofoam rings represent the electrons (larger and 12 inches in diameter) and protons (smaller and 6 inches in diameter). Dark wires represent the magnetic flux fields that prevents the atom from collapsing by repelling each other with magnetic fields of the same polarity. I will also display several other models related to Bergman-Lucas ring theory.