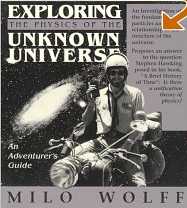 Milo M. Wolff
Part I describes the fundamental laws underlying science. The emphasis is on intuitive understanding of the foundations of scientific knowledge to enable deciphering of Mother Nature\'s designs for the physical universe. It explains the six fundamental laws: Conservation of Energy, Gravity, Coulomb\'s force, Newton\'s laws, Quantum Mechanics, and Special Relativity. The book follows a trail of scientific ideas and clues from the Greeks to Newton, Mach, Clifford, Einstein, Dirac, and Feynman to Modern galactic astronomy.

Part II discusses cosmology, space and the universe. It explores their enigmas and paradoxes. Dr Wolff\'s role is a friendly guide to the reader, enabling her/him to understand the machinery behind Nature\'s laws, and to help solve the puzzles which have confounded scientists over the years. The century-old controversy of wave structure or substance structure of particles is examined and it is shown that a wave structure is the origin of the natural laws. The mysterious role of space itself is explored and the reader is asked and helped to choose between truth and prejudice.