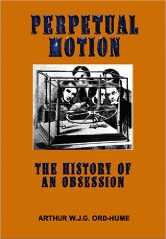 An illustrated overview of perpetualmotion machines and their inventors. The deceptively simple task of making a mechanism which would turn forever has fascinated many famous men and physicists throughout the centuries. In fact, the basic tenets of engineering grew from the failures of these perpetual motion machine designers. And, despite the naivete and even the blatant trickery of many inventors, there still exist a handful of mechanisms which defy explanation: * a vast canvascovered wheel which turned by itself was erected in the Tower of London * another wheel turned endlessly in Germany and was discussed by philosophers and scientists throughout Europe, including Sir Isaac Newton.

\"Make a machine which gives out more work than the energy you put into it and you have perpetual motion. The deceptively simple task of making a mechanism which would turn forever fascinated many an inventor and a number of men applied themselves to the task. Their quest in some cases became an obsession. However, the perpetual motion seekers played an important part in the history of engineering. Without their early experiments the science of mechanics would not have developed so rapidly. Even today, the fascination of the subject is not quite dead.\" - TeslaTech