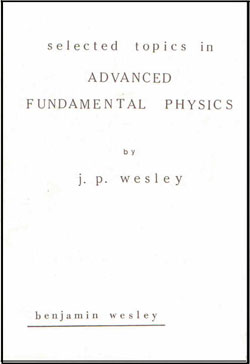 Paul Wesley
This book is suitable for an advanced course in fundamental physics. The latest evidence and theories in certain crucial areas are presented and analyzed free from the restraints of old ineffective traditional ideas. The empirical facts agree with the absolute space-time of Newton Galilean kinematics is fundamental. When all experiments are considered, the oneway energy velocity of light is found to be c fixed with respect to absolute space. As originally predicted by Voigt in 1887, the Michelson-Morley result is a Doppler effect in absolute space-time. Kaufman mechanics, where the particle momentum is p = mv/√(1 ? v2/c2) and v is the absolute velocity, while probably correct, needs further confirmation. Mass energy equivalence, E = mc2, is an important fundamental fact. Newtonian gravitation extended to include the mass equivalent of the field energy itself as part of the source mass yields Hubble?s constant and permits super massive bodies (black holes). Quasars and galaxies can arise as collisions between super massive bodies. The Weber potential from electrodynamics when applied to gravitation yields Mach?s principle. Recent decisive experiments show that Weber electrodynamics, extended to fields and radiation, is correct and that Maxwell theory is wrong. The original Ampere force law is correct; and the Biot-Savart law, which violates Newtons?s third law, is wrong. The spinning charged ring model of the electron, held together by electromagnetic forces only, yields all of the electron?s properties including the anamolous magnetic moment. Quantum theory is based upon classical wave theory where the phase is p?(r ? vt)/h. Poynting?s vector prescribes discrete particle trajectories that yield interference patterns, including the double pinhole pattern. Initial conditions prescribes exact subsequent motion as in classical physics. For bound particles the Schroedinger equation yields the usual eigenvalues. Irreversible thermodynamic ordering processes in an open system are driven by entropy production. A statistical thermodynamic system with a temperature greater than 2.7 K open to deep space proceeds toward states of lower entropy. This powerful law of nature indicates the direction of cosmological processes and the evolution of life. The 2.7 K cosmic background is the red shifted light from the most distant galaxies.