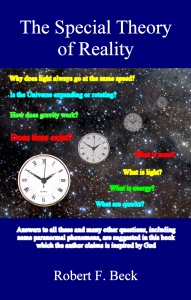 Robert F. Beck
This book challenges established theories, right down to basic concepts, and suggests a more logical approach, which seems to offer a whole lot of explanations for the mysteries and enigmas of physics, including some paranormal phenomena. Amongst many others, answers are suggested to the following questions: Why does light always go at the same speed? Is the Universe expanding or rotating? How does gravity work? Does time exist? What are quarks? What is energy? What is light? What is mass? The author believes that God has shown him, inter-alia, how gravity operates at sub-atomic level and that it can be defeated. If he is right this work could be more significant in this century than Relativity and the Wright Brothers were in the last because it holds the key to advances actually capable of reversing climate change and energy dominated politics. Logical, scientific, explanations are suggested for various paranormal phenomena including levitation, ESP, ghosts, and UFOs. Consideration of the latter even includes suggested drive mechanisms in Earth?s atmosphere and anti-gravity devices. The author suggests that Relativity has been misunderstood and that when fundamentals such as time, energy, and mass are considered logically, a unified field theory is possible in which gravity can be fully understood as a real force. He suggests experiments which can be carried out to verify his theory, which should lead to anti-gravity devices. This would be the greatest advance in the history of Humanity. Put together with his assertion that the speed of light can be exceeded it could not only usher in the era of low energy transportation on this planet, it could make exploration of the Universe a real possibility.