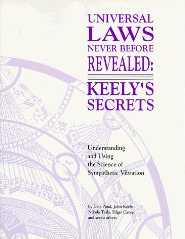 Nikola Tesla
One hundred years ago, scientist/inventor/philospher John Keely built various devices that were able to overcome gravity, tunnel through rock using a hend-held device, use acoustics to power engines, and create superconductivity by using wires made of gold, silver and platinum. Almost lost, this book compiles ten years of research by the editor/author that explains the technology used. Understandable to the laymen and useful to the most advanced researcher, the physics of sympathetic vibrations is the unification of many different scientific, engineering and philosophical disciplines into a new paradigm. This science demonstrates the commonality that underlies all phenomena vibration! This book will be fascinating to both laymen and the most advanced scientists. Maybe you will be the one to be able to duplicate some of the incredible machines that John Keely developed which were all but lost for a hundred years. This monumental work contains the mathematics and basic principles which can usher in a new awareness as well as new sources of energy.

From the Author
This book contains a vast collection of material on Keely and his work. In it has been included all the pictures and charts known to exist as of this date. I have also included all that we have been able to decipher of this wonderful new science and philosophy. There will be more discoveries and these will be published at a later date. The discoveries mentioned here demonstrate that Keely's science of Sympathetic Vibratory Physics is a wholistic approach to science and nature and reveals a wonderful order and simplicity. It is hoped readers will find a number of ideas and methods in these pages which they can apply to their current scientific work and research.