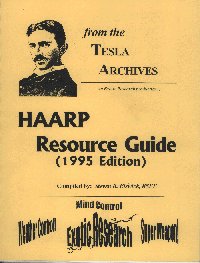 Steven R. Elswick
It is with great trepidation that many people have looked at the HAARP program, which has it's foundation based on Tesla's greatest achievement... the Magnifying Transmitter. Inside these covers, Oliver Nichelson outlines how the Magnifying Transmitter could be used as a weapon... and that perhaps its destructive power may cost thousands their lives in a publicity stunt gone awry. His paper, Tesla's Long Range Weapon, the Tunguska Explosion of 1908, and Wireless Power not only reveals this shocking theory, but then goes on to support it with factual evidence. Shocking? yes... impossible?... NO!

As we approach the 21st century, many alternative researchers have created a new field of study... scalar electromagnetics. Tom Beardon, lays out the basic scalar theory and how it differs from traditional electromagnetics. Furthermore, in his paper, Tesla 's Electromagnetics and Its Soviet Weaponization, he outlines his theory with supporting documentation, that the Soviets have been working with scalar electromagnetics for decades and have developed weapons along the line of HAARP that have terrifying capabilities. The "guide" takes a serious look at some of the other "ionospheric studies" the military undertook in the past... including setting off atomic weapons in the atmosphere.

One of the claims about HAARP is related to weather control. Our chronology lays out events related to bizzarre weather, much of it intensified near the infamous GWEN sites. It appears that electromagnetic waves have more of an effect on our weather than anyone realized. This was the first book put together on HAARP. It has material... from historical perspectives to technical theoretical explanation on how this secret device works! Includes many source documents, the Eastland patents, articles, and more!!!