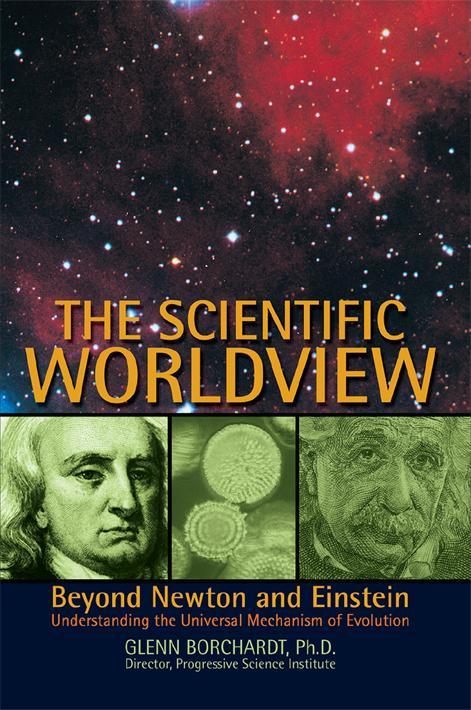 Glenn Borchardt
The Scientific Worldview provides nothing less than the first outline of the philosophical perspective that will develop during the last half of the Industrial-Social Revolution. Borchardt first acknowledges the perpetual philosophical struggle that underlies our understanding of the universe and our place in it. The choice we must make is not between faith and reason, but between determinism and indeterminism. He warns us that scientific philosophy must begin with determinism and end with determinism: the belief (or faith) that all effects have material causes. His elaboration on this theme provides a clear philosophical foundation, The Ten Assumptions of Science, intriguing in itself for its innovation in proposing a complement to the Second Law of Thermodynamics. Worldviews differ simply because they are founded on ultimately unprovable dialectically opposed assumptions. Just as one cannot determine the causes of all effects, one cannot travel to the end of the universe to prove whether it is infinite or finite. His belief in microcosmic and macrocosmic infinity is woven throughout the assumptions and throughout the book. The central concept of the resulting philosophical system is univironmental determinism, a new, universal, mechanism of evolution founded on the simple proposition that whatever happens to a thing is a result of the infinite variety of matter in motion within (the microcosm) and without (the macrocosm). Borchardt points out that the first mechanism of evolution, natural selection, was classically, overtly, and embarrassingly macrocosmic. Like Newton and the atomists before him, Darwin had totally neglected the insides of his evolutionary model. It was left to systems philosophers in the 20th century to include genetics to formulate what is otherwise known as neo-Darwinism, the current mechanism of evolution. Borchardt faults this mechanism as being overly specialized and relatively useless for understanding the evolution of the non-biological world. Univironmental determinism thus goes beyond Newton (classical mechanism), who overemphasized the macrocosm, and Einstein (systems philosophy), who overemphasized the microcosm. These two earlier scientific world views must be abandoned in favor of a worldview that unites both approaches under univironmental theory. Borchardt outlines numerous examples of univironmental analysis, resulting in some surprising, yet theoretically satisfying speculations: Gravity is a push, not a pull; light is motion; time is motion; there is an ether; Big Bang cosmology must be rejected as microcosmic; humanity will not cause its own extinction; the global demographic transition in 1989 marks the midpoint in humanity\'s juvenile development.