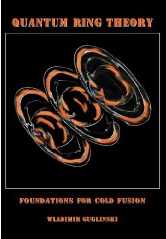 In Quantum Ring Theory Wladimir Guglinski presents a radical new theory concerning the fundamental nature of physics. Hailed as a intriguing theorist by Dr. Eugene Mallove, president of the New Energy Foundation, Guglinski argues that the current understanding of physics does not put forth an accurate model of the world. Instead, Guglinski argues that we must once again consider the "aether," a notion originally put forth by Greek philosophers. By considering the nature of "aether" and its role in physical processes, Guglinski is able to put forth a theory that reconciles Quantum Physics with the Theory of Relativity. To date, no other physical theory is able to accord for the intraction between these two fundamental areas of physics. As part of Guglinski's new theory, the author presents a new model of the neutron. Guglinski's model of the neutron has been confirmed by contemporary physical experiments: The first one was made by Don Borghi and published in 1993 by the American Institute of Physics; the second experiment was made by Elio Conte and Maria Pieralice, subsequently published in the magazine Infinite Energy in 1999. Currently, other experiments around the world are being conducted to test the remainder of Guglinski's theoretical work. Quantum Ring Theory presents for the first time in a complete text the theoretical work of Wladimir Guglinski. In this volume cutting edge theoretical work in physics is presented; theoretical work which may ultimately change the very way we understand the world.

Review
A new interpretation of elementary particles and the atom's nuclear structure. Guglinski provides an entirely new understanding of the structure and the mechanics of the atom and the atomic nucleus, which in the presented way requires the interaction with the ether to explain, for instance, the quantum weirdness of the behavior of single, isolated photons and electrons. I highly recommend it. -- Paul W. Schoening (pwschoe@yahoo.de): Mechanical Engineer

WHOA!!...we have a breakthrough here!!! Hi I just came across this book 'Quantum Ring Theory' by Wladimir Guglinkski and found it quite exhilarating and thrilling. The thrill is in the way Quantum Theory is being treated in this book which is totally a new approach to physics. The proposed structure of the Neutron in terms of n=p+e, the ZOOM Effect, Helical trajectory, a completely new interpretation of DUALITY are some of the most original works of the author. I don't think I have seen any of the Modern Physicists as original as Wladimir. I must say that any serious physicist must go through this book and I would be glad if some of the universities come out with funds to perform certain experiments to establish Guglinski's Quantum Ring Theory. WLADIMIR.......HATS OFF MAN!!!!!! -- Naveen, A Reviewer

I am the author of Symmetrical Special Relativity, which first paper was published by the journal Pramanas in July 2008 under the title: 'Deformed special relativity with an invariant minimum speed and its cosmological implications'. We, theoretical physicists, develop theories by using the mathematics, some theorems, many axioms, supporting fundamental principles, but there is not a physical reality underlying our theories. Actually one of achivements of the 20th Century is that a physical reality is unatainable in Modern Physics. But Guglinski's theory just supplies physical models to Theoretical Physics. In his theory are proposed physical models for the photon, the fermions, the neutron, the hydrogen atom, the nucleus, and the aether, and his QRT proposes the fundamental principles from which those physical models work. My SSR and Guglinski's QRT are complementary. A future consistent agglutination of SSR and QRT will perform a New Grand Unified Theory which, if confirmed by experiments, will constitute the New Physics of the 21th Century. -- Claudio Nassif (claudionassif@yahoo.com.br): PhD theoretical physicist, August 04, 2008