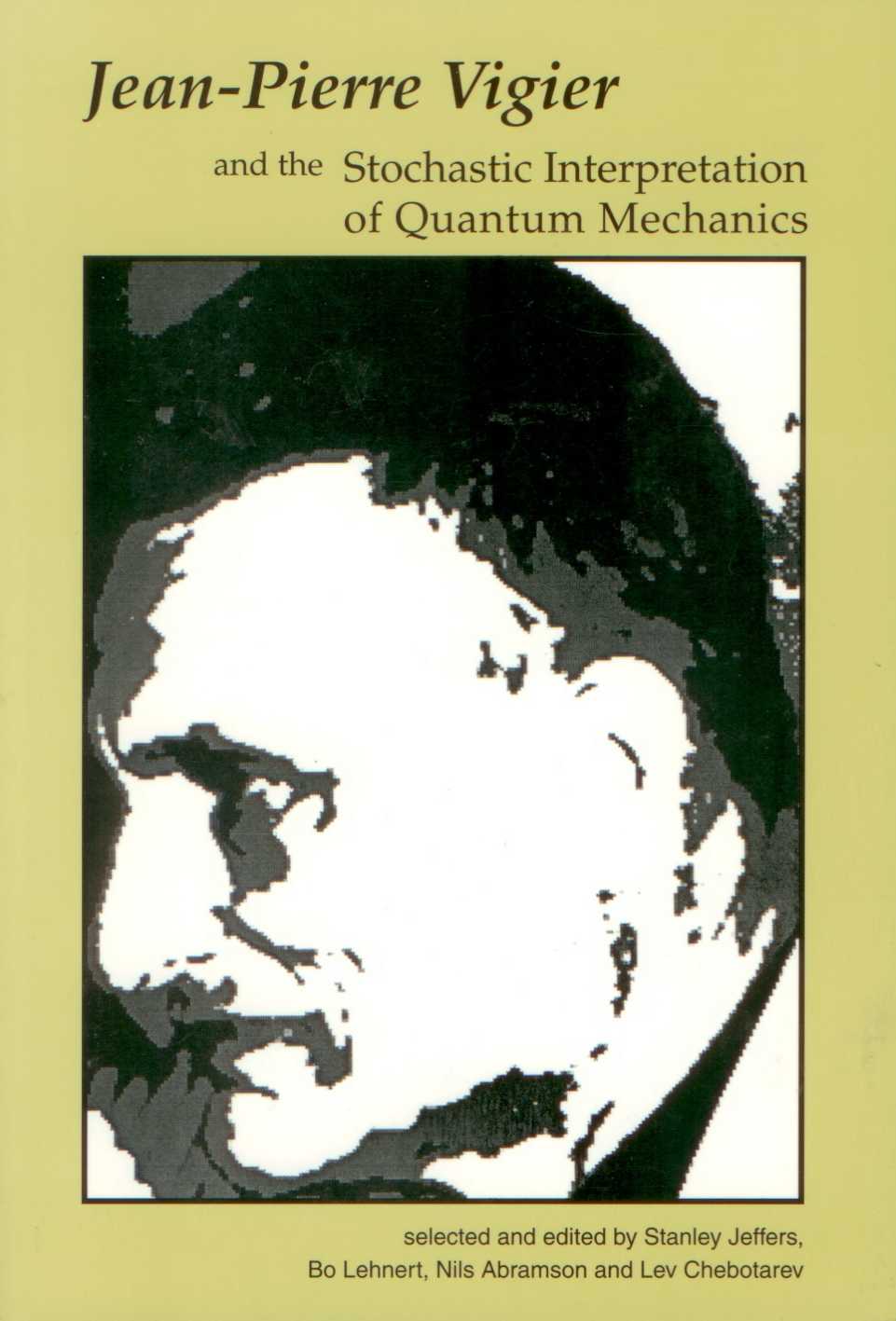 This book serves as a useful reminder that the widespread belief that the quantum world is irreducibly weird, indeterministic, unvisualizable, and dependent on human observation, is not required by experimental results, and that a causal, more rational and intuitive interpretation is possible.

The book was compiled as a tribute to Jean-Pierre Vigier on the occasion of his 80th birthday. It begins with a preface by Stanley Jeffers outlining Vigier\'s life. He worked closely with Louis de Broglie and David Bohm, and helped to pioneer the de Broglie-Bohm-Vigier approach to quantum physics, also known as the causal stochastic interpretation. The main features of this approach and how it evolved are explained in an introduction by Lev Chebotarev. The bulk of the book consists of 22 facsimile reprints of papers on quantum mechanics authored or coauthored by J.P. Vigier. There is also a biography of Vigier\'s works. Most of the papers are, at least in part, highly technical, but much of the discussion and analysis of the contending interpretations of quantum physics can be readily understood by nonspecialists.

As Chebotarev points out, while quantum mechanics works impeccably as a mathematical tool, \'the conceptual situation in quantum mechanics appears to be the most disturbing in modern physics\'. Seventy years after the advent of quantum theory, \'there is still no clear idea as to what its mathematics is actually telling us\' (p. 1).

A central tenet of the standard Copenhagen interpretation of quantum mechanics, as developed by Bohr, Heisenberg, Born, and Pauli, is that \'There is no quantum world, there is only an abstract quantum physical description\'. But what does the mathematical formalism actually describe? It is hard to believe that the quantum world underlying our material, macroscopic world consists of nothing but abstract \'probability waves\' that somehow \'collapse\' into particle-like objectivity whenever a measurement is made (or, according to some theorists, whenever a measurement is registered by a conscious human mind).

Each time the position of, say, an electron is measured, it is found in only one place. In between measurements we do not know exactly where the electron is, but the wave function can be used to calculate the probability of it being found in any particular region of space. On the assumption that the wave function provides a complete description of quantum objects, many physicists believe that a particle does not follow a definite trajectory in between measurements, but dissolves into \'superposed probability waves\', which then \'collapse\' instantaneously, discontinuously, and quite inexplicably when the next measurement is made.

This probabilistic approach was strongly opposed by Einstein, Planck, and Schr?dinger, but it was de Broglie and later Bohm and Vigier who played the main role in developing an alternative. Chebotarev writes:

The central idea of the Stochastic Interpretation of Quantum Mechanics consists in treating a microscopic object exhibiting a dual wave-particle nature as composed of a particle in the proper sense of the word (a small region in space with a high concentration of energy), and of an associated wave that guides the particle\'s motion. Both the particle and the wave are considered to be real, physically observable, and objectively existing entities. (p. 2)

Particles are pictured as oscillators (or solitons) beating in phase with their surrounding pilot waves, which in turn result from the superposition of superluminal phase waves carried by a subquantal etheric medium subject to constant stochastic fluctuations. The force, or quantum potential, determining particle motions therefore carries information from the entire environment, accounting for the \'wholeness\' of quantum phenomena.

The causal stochastic approach can account for all the quantum properties of matter, including all the so-called paradoxes. It therefore disproves the claim that the quantum formalism requires us to abandon not only the quest for an explanation of quantum phenomena but also the concepts of causality, continuity, and the objective reality of individual microobjects. In Vigier\'s view, the Copenhagen interpretation is based on \'arbitrary philosophical assumptions\', and its insistence on the absolute and final character of indeterminacy is dogmatic.

The causal stochastic approach is \'the only known interpretation of quantum mechanics in terms of which all quantum effects can be explained on the basis of causal continuous motions in space and time\' (p. 142). It has no place for the ill-defined notion of wave-packet collapse. There is only a \'pseudo-collapse\', which \'simply represents a change of our knowledge and does not correspond to any real physical changes in the state of the system\' (p. 147). Vigier says that even if the quantum-potential approach \'is not taken as a fully satisfactory description of quantum mechanical reality, it at least shows in a clear way the features that such a description must entail\' (p. 169).

In the causal approach, therefore, \'the material world has an existence independent of the knowledge of observers\' (p. 170). Vigier does not discuss possible explanations for genuine psychokinesis (\'mind over matter\'). However, invoking the abstract notion of wave-function collapse certainly contributes nothing to a concrete understanding of such phenomena (see Pratt, 1997). Bohm believed that the causal interpretation opened the door to the creative operation of deeper, subtler, more mindlike levels of reality. Like Bohm, Vigier stresses that it is by no means a return to the classical mechanistic worldview. Some of his statements, however, seem to deny the existence of free will (pp. 50-51, 99-100), though he acknowledges that, given the fundamental complexity of nature, \'The ghost cannot be exorcized from the machine\' (p. 169).

Neutron-interferometry experiments reproduce the double-slit configuration with massive particles and introduce new interaction possibilities through neutron spin. In these experiments, something exchanges energy with the spin-flip coils in the two arms of the interferometer, and this interaction almost certainly involves real neutrons rather than nebulous probability waves. Although such experiments cannot yet determine the path of each individual neutron, they prove \'the incompleteness of the quantum-mechanical Copenhagen description because the persistence of an interference pattern is combined with the existence of a definite trajectory for each particle, a fact forbidden in the Copenhagen interpretation\' (p. 257). In other words, the wave and particle aspects of matter can manifest simultaneously in the same experimental setup, thereby contradicting the complementarity principle.

Vigier argues that quantum entanglement (EPR-type) experiments leave no doubt that quantum mechanics is a nonlocal theory, i.e. that quantum systems can show correlations that cannot be explained in terms of classical forces or signals propagating at or slower than the speed of light. However, the EPR experiments conducted to date still contain loopholes, and Chebotarev puts the probability of nonlocal connections at about 90% (for a dissident view, see Thompson, 1998). Vigier proposes that nonlocal interactions are not absolutely instantaneous but causal and superluminal; they are mediated by the quantum potential, carried by superluminal phase waves in a Dirac-type ether consisting of superfluid states of particle-antiparticle pairs. (If superluminal connections were brought about by individual particles rather than phase waves, this would contradict relativity theory, which Vigier upholds.)

In my opinion the most important development to be expected in the near future concerning the foundations of quantum physics is a revival, in modern covariant form, of the ether concept of the founding fathers of the theory of light. [I]t now appears that the vacuum is a real physical medium which presents some surprising properties. (p. 272)

In several places he refers to the \'negative result\' of the Michelson-Morley ether-drift experiment of 1887 (pp.63, 192). However, contrary to what numerous textbooks and popular science books claim, this famous experiment did not give a null result.

Vigier (1997a) himself acknowledges this in an article not included in the book, or even mentioned in the bibliography. In it he states: \'the observed effect was not zero in Michelson\'s famous experiment, as later confirmed by a (presently almost forgotten) set of very detailed and very careful experiments by Morley and Miller [Miller, 1933].\' He presents a brief overview of the \'long set of remarkable experiments\' conducted from 1881 to 1926, which \'are now completely ignored in the physics community\'. These experiments detected a small but consistent and systematic ether drift of about 9 km/s.

Although relativity theory assumed a zero ether drift (and a constant velocity of light), Vigier (1997b) argues that a positive ether drift is compatible with special relativity if photons are assumed to have a very small mass. He also argues that Sagnac\'s discovery in 1910 of fringe shifts in rotating interferometers (the Sagnac effect) can be reconciled with general relativity on the same assumption. Whether the results of ether-drift experiments, including more recent ones (e.g. Silvertooth & Whitney, 1992), are best understood in terms of standard relativity theory is hotly contested (e.g. Galeczki, 1995; Hazelett & Turner, 1979; M?nera, 1997; Spolter, 1993).

Vigier points out the radical implications of non-zero-mass photons, as originally proposed by Einstein, Schr?dinger, and de Broglie:

If confirmed by experiment, it would necessitate a complete revision of present cosmological views. The associated tired-light models could possibly replace the so-called expanding Universe models. Non-velocity redshifts could explain the anomalous quasar-galaxy associations, etc., and the Universe would possibly be infinite in time (p. 273).

Vigier\'s book is an important contribution to the debate on fundamental aspects of quantum physics.