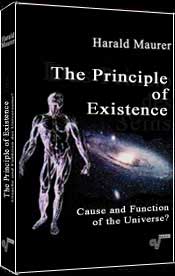 The Principle of Existence (Buy Now)

Harald Maurer
"Why do we believe that a body ends where we do not feel it anymore? Why not where we cannot hear or see it anymore? In short: could it perhaps be that every body expands into eternity on its own even if we do not perceive this expansion with our limited senses?" The logically consistent continuation of this thought uttered analogously by the physicist and philosopher Ernst Mach leads to a kind of General Field Theory whose effects touch every field of science, unveil the mystery of gravitation, and make it comprehensible why Einsteins General Theory of Relativity really corresponds to an apparently bizarre reality. This reality in question as a product of the interaction of our perception with a world of quanta, impulses, and structures is obviously based on a very simple cause. Inspired by Machs principle, origin and function of the cosmos are described as the effect of a simple fact: the principle of displacement and universal repulsion of a matter which stands in its own way. The first edition of this book, already published in 1987, was distributed thousandfold via the internet and initiated heated discussions in physics and philosophy forums. The result of the international feedback is this revised, extended, and up-dated new edition of the Principle of Existence.