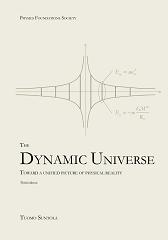 The Dynamic Universe, Toward a Unified Picture of Physical Reality (Buy Now)

The Dynamic Universe theory is a holistic description of the observable physical reality. It is a unifying theory converting spacetime in variable coordinates into dynamic space in absolute coordinates. The Dynamic Universe theory relies on an overall zero-energy balance in space and the conservation of the total energy in interactions in space. Predictions for local phenomena in DU space are essentially the same as the corresponding predictions given by the special and general theories of relativity. At extremes - at cosmological distances and in the vicinity of local singularities in space - differences in the predictions become meaningful. Reasons for the differences are traced back to the differences in the basic assumptions and in the structures of the two approaches.

\"The Dynamic Universe, Toward a unified picture of physical reality\"  gives a detailed introduction of the Dynamic Universe theory from its philosophical basis to predictions and comparisons to prevailing theories and observations.

\"Dr. Suntola develops the ideas of Einstein and Feynman into a complete theory: \"The Dynamic Universe\". The model is based on the most powerful laws of nature: conservation of total energy and momentum. The interpretation of the derived equations is unambiguous and the calculations agree with observations to high degree of accuracy without any fitting parameters like the dark energy. The model is rational and can be understood by anyone with basic knowledge in physics and mathematics.\"
- Ari Lehto, PhD, physics

\"Dr. Suntola\'s Dynamic Universe describes physical nature from a minimum amount of postulates. In the Dynamic Universe, conservation of total energy links local interactions to the rest of space - providing a solid theoretical basis to Mach\'s principle and a natural explanation for the relativity of observations. Not least, the model accurately explains observed physical and cosmological phenomena.\"
- Heikki Sipila, PhD, physics