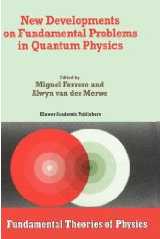 Quantum theory is one of the most fascinating and successful constructs in the intellectual history of mankind. Nonetheless, the theory has very shaky philosophical foundations.

This book contains thoughtful discussions by eminent researchers of a spate of experimental techniques newly developed to test some of the stranger predictions of quantum physics. The advances considered include recent experiments in quantum optics, electron and ion interferometry, photon down conversion in nonlinear crystals, single trapped ions interacting with laser beams, atom-field coupling in micromaser cavities, quantum computation, quantum cryptography, decoherence and macroscopic quantum effects, the quantum state diffusion model, quantum gravity, the quantum mechanics of cosmology and quantum non-locality along with the continuing debate surrounding the interpretation of quantum mechanics.

Audience: The book is intended for physicists, philosophers of science, mathematicians, graduate students and those interested in the foundations of quantum theory.