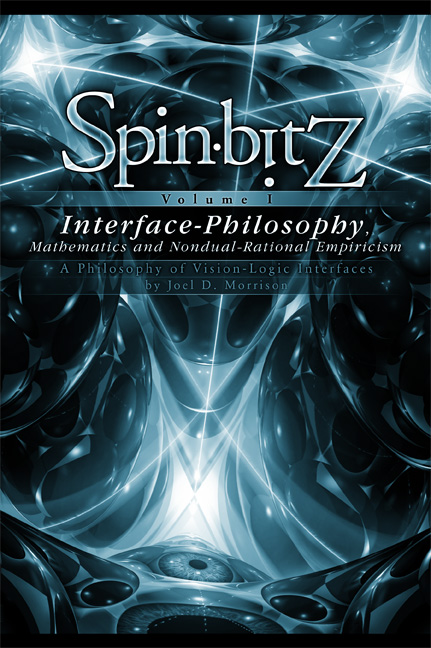 SpinbitZ is a playful, whirling, churning, folding and unfolding set of concepts for the illumination and integration of abstract philosophical ideas, through the integrated use of the imagination and its percepts. SpinbitZ constructs a set of philosophical \"graphical user-interfaces\" at the vision-logic level of cognition. It is thus a philosophy of vision-logic interfaces, employing the \"triune interfaces,\" or \"cultivated thirds\" hidden within the polarities of every duality, dichotomy, controversy and paradox to build a consistent system for the effective understanding and resolution of their key esoteric truths, rather than for their dualistic and reactionary refutation. In using these interfaces to trace a nondual thread of rationality to its historical roots, it is discovered that only the dualistic, exoteric (or commonly understood) forms of rationality begin with the Greek trinity: Socrates, Plato and Aristotle. By reconnecting to the earlier nondual truths of Heraclitus and Parmenides, the conceptual axis-mundi itself (what Lao Tzu called \"the door to all wonders\") is found spinning at the core of Zeno\'s paradox, and thus at the core of nondual rationality. Through a fusion of Art, Science, Mathematics and Philosophy?and with the help of nearly a hundred detailed diagrams and illustrations?this embryogenesis of rationality is traced as it reconnects to the alternative lineage of philosophy uncovered by Deleuze, with a nondual fusion of the systems of Spinoza and Leibniz.

In esoteric Theosophy it is said that in the \"shock\" of the interface between Spinoza and Leibniz \"the essence and Spirit of esoteric philosophy would be made to appear.\" Unfolding through these vision-logic interfaces, this Interface Philosophy finally appears to reconcile many of the dualities plaguing the history of exoteric rationality. In its nondual interface with empiricism and Integral theory, for example, a detailed sketch of an Interface Epistemology is unfolded. Operating at the crossroads of the ontic-epistemic (reality vs. knowledge) and subject-object polarities, the evolutionary symbiogenesis of the exoteric dichotomies at the foundations of human knowledge is examined?illuminating and reconciling the \"ontic-shadow\" of post-modernity.

The process of reanimating these hidden nondual truths of rationality demonstrates that mathematics itself mirrors this holarchic structure implicit in the embryogenesis of the concept.  This is because mathematics, as the art and science of pure relation, employs the most rarefied and abstract form of the concept, e.g. numbers and operations. Unfolding in layer upon layer, this Interface Mathematics transitions from the \"oppositional forces\" of dualism, ultimately again to the \"intensive,\" integral or \"second-tier\" truths, and to the originary axis-mundi of the nondual.  In making mathematics visible, visceral and understandable?a Vision-Logic Coordinate System is constructed revealing two fundamental axes of conceptual thought (one of which is this axis mundi or immanent/transcendent axis).  Spinoza\'s \"three infinities\" are then shown as the triune interface, or cultivating third between these binary axes, for illuminating and reconciling the many paradoxes and controversies of infinity?e.g. Zeno\'s, Galileo\'s and Cantor\'s?as they wind their way into the truths of our modern mathematics of the continuum and set-theory. - Back cover.