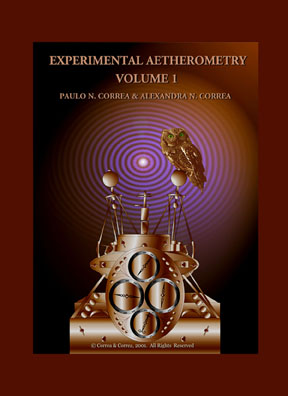 In this fascinating, seminal work, the Canadian biophysicists Dr. Paulo Correa and Alexandra Correa provide a step-by-step exposition of their path-breaking discovery and investigation of the nature and structure of massfree energy. It is a book for all who have a serious interest in understanding nature. The first volume focuses on the discovery and study of the kinetoregenerative action of massfree energy (specifically, its 'latent heat' component) in slowing down, or arresting, the spontaneous discharge of electroscopes, as well as the role of this energy in producing the thermal anomalies observable with certain metal enclosures.

This First Volume of Experimental Aetherometry provides, for the first time in the history of science and with new methodologies, a solid, in-depth study and analysis of the thermal and electroscopic anomalies originally discovered by Wilhelm Reich, and described by him as demonstrations of the benign effect of special enclosures that he called orgone accumulators (ORACs). The thermal anomaly is characterized by a constant positive temperature difference between the space at the top of the inner metallic layer of an ORAC and the surrounding atmosphere. The electroscopic anomaly is characterized by the fact that charged electroscopes discharge more slowly inside an ORAC than outside of it.

In the course of this exploration of the two fundamental ORAC phenomena, the Correas verify the two basic anomalies proposed by Reich, reproduce the Reich-Einstein experiment with a Faraday cage under stringent conditions and with novel controls, propose a new treatment of the electric and nonelectric (gravitational) interactions of massbound charges trapped in the conduction band of metals, examine the behavior of atmospheric electroscopes with respect to meteorological and geophysical functions, demonstrate electroscopic arrest induced by the midday Sun, introduce a novel experimental model for the charging of electroscopes, identify the distinctive electroscopic response of living systems, determine the blackbody spectra of ORACs, optimize the ORACs' production of anomalous sensible and latent heats, show how the slowing down of the electroscopic discharge by ORACs occurs independently from the polarity of the charged electroscope and often reaches complete arrest of the discharge, create a novel method to determine the latent heat accumulated inside ORACs, and discuss the problems with the fundamental concepts of orgonometry.

For those interested in new physics or the physics of the massfree Aether, this is an indispensable, ground-breaking publication that lays down some of the most fundamental tools of the new science of Aetherometry.