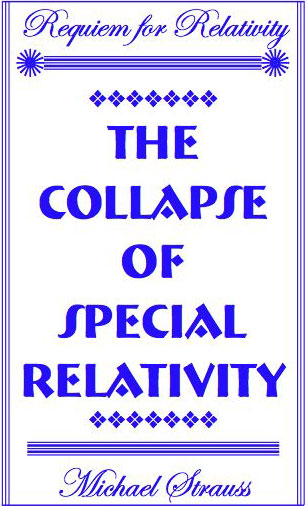 Requiem for Relativity: The Collapse of Special Relativity (Buy Now)

In 1905, Albert Einstein published his Theory of Special Relativity within which he described the now famous mass-energy formula E=mc2. This theoretical construction revolutionized the classical perspective of the universe as understood since the time of Isaac Newton. No longer were the classical concepts of Absolute Space and Absolute Time valid irrespective of observation point. Now the concepts of Length Contraction and Time Dilation were in vogue and Physics would never be the same. Until now!

In an easy to read format along with many illustrations, Michael Strauss leads the reader in a comprehensive description of the history leading up to Special Relativity Theory. He points out errors in the original assumptions, documents and ideas which led to the acceptance of this theory. However, his most powerful argument against Special Relativity is none other than the equations of Special Relativity! As a result, E=mc2 is no longer relative!