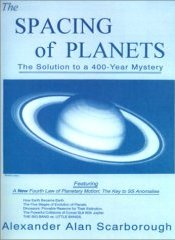 The Spacing of Planets: The Solution to a 400-Year Mystery (Buy Now)
KeyWords: expanding earth

In this revolutionary work, Scarborough takes us from the Copernican idea of our sun-centered Solar System to the recent discoveries of giant exoplanets as he seeks to do no less than rebuild the foundations of knowledge of the origins and evolution of planets. A retired researcher, he offers new answers to questions that have puzzled philosophers for centuries: How did Planet Earth come into being? How and why did the planetary orbits of our Solar System form in a mathematical pattern? The answers will cause scientists to rethink beliefs about the origins and evolution of planets.

Scarborough addresses these profound questions with powerful substantive evidence that voids the need for speculative uncertainties now common in current theories of planet formation. The book opens with an insightful and startling account of his solution to the new Fourth Law of Planetary Motion explaining how the nebulous planetary masses attained their orbital spacing around the sun. With Kepler\'s Three Laws of Planetary Motion, the Four Laws reveal the explosive, dynamic origin of our Solar System some five billion years ago, and thus challenging the modified Laplace accretion concept of planet formation.

The author then gives definitive insights into how and why each planet evolves through five common stages of evolution in full accord with size.